And now I know what Max worries about 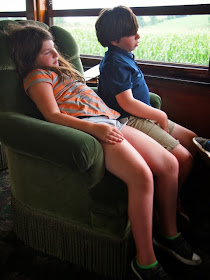 Sabrina isn't sure she's got all of her spelling words down pat, so she wants to practice again. Another girl at school is snubbing her and she's not sure why, what do I think it could be and will this girl always be that way? Will her earring holes close up if she doesn't sleep in earrings? Oh, and she doesn't want to go to sleepaway camp next summer and we're not going to make her, right? Right?

Sabrina regularly shares concerns and worries with me. Max rarely does, other than when he is scared we're going someplace where there will be loud noises, such as fireworks or an event. "Loud!" he'll say, swiping an ear. His lack of worrying could partly be because of his cheerful, easygoing disposition, though I also wonder if he's not yet cognitively at a level where he has many concerns.

Or maybe it's a communication thing. Those skills are growing in other ways; he's started writing sentences—sentences!—on his Prololquo2Go speech app. He's using pronouns; before, he used to say "Max is getting Cars 2 Talking Lightning McQueen" and lately he's saying "I'm getting a Cars 2 Talking Lightning McQueen" (about 20 times a day). But he doesn't use the app to communicate feelings.

The way his brain works is, in many ways, still a mystery. The other night, though, I got a major peek in. It started with applesauce. Sabrina and I went apple-picking with friends while Max and Dave were at a program, and when we came home we decided to make applesauce. (This is my go-to recipe, easy and tasty). So we cored the apples, cut them up, threw them into the saucepan with sugar, water and cinnamon and put them over a medium flame on the stove.

Then Max needed a bath, and Dave and I walked him upstairs. "I'm cooking with Sabrina, can you do this?" I asked Dave, only he booked downstairs while I was helping Max take off his clothes. So then I ran the bath, washed Max, shampooed his hair and let him kick in the water, as he loves to do. I took a few minutes to check email.

Suddenly, our smoke alarm went off just when I smelled something burning. "DAVE! TURN OFF THE STOVE!" I shouted from upstairs. He did, and opened the back door to let in air. After Max was dried and in jammies, I had a little standoff with Dave in the living room. OK, a big one. Only some of the applesauce was OK and the bottom of the pot was totally scorched.

"You were on your computer!" Dave said.

"Yeah, but if you had just given Max a bath and let me pay attention to the applesauce and finish cooking it with Sabrina, this wouldn't have happened!" I yelled. It wasn't just the applesauce. Are you ever really fighting over applesauce or taking out the garbage or picking up socks over the floor? No, it's always some underlying issue, and this time it was about consideration. I'd had a special afternoon out with Sabrina, and she'd been so excited to cook up the apples together. I felt awful for her.

The kids had wandered in and were listening, wide-eyed. I know what it's like to watch your parents fight because I did it plenty of times as a kid. I knew I needed to stop, or at least walk away until I was calm, but I just couldn't let it go.

"We picked all these apples, and now the kids aren't going to have much applesauce!" I said, angrily.

"I can go to the supermarket and buy more apples!" Dave said.

"That's not the point!" I answered. (Lucky for him he didn't mention buying applesauce, or I might have cored him.)

"Honey, you're right, I should have given Max a bath and let you finish the applesauce," Dave said.

Acknowledgment can be every bit as satisfying as an apology. As I took a second to savor it, Max's bottom lip jutted out and tears started falling. "No ight!" he said. ("No fight!") I felt badly, but not nearly as much as when I grabbed him onto the couch to hug him. He put a hand on my chest, then he put a hand on Dave's chest. And then he got up and walked over to one of our wedding photos on the bookshelf and pointed to it.

Without a word, he was letting us know that he was worried whether or not we still loved each other. Worried just like I had worried back as a kid that my mom and dad weren't going to stay together. (They didn't.)

Instantly, it broke the tension. "Sometimes Mommy and Daddy fight but we still love each other," I said, and we kissed. Then we did a family group hug and we tucked the kids into bed. I scooped the salvageable applesauce into a dish. Then I googled "scorched pot" and found a vinegar-baking soda trick that mostly did the job. Dave and I took turns scrubbing. And I only grumbled a little more.

Oh, yes. Max has worries, just like any kid. This is reassuring, and yet another reminder to not underestimate this boy of mine. He knows. He knows.