Yes, people with disabilities can be parents. Why is that shocking? 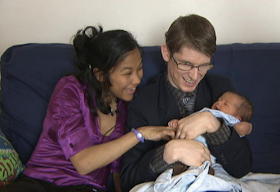 Authorities are threatening to take away the baby of a Canadian couple who both have cerebral palsy unless he receives round-the-clock care. It's a mind-boggling story, and I'll share it here in case you haven't yet heard about it:

Maricyl Palisoc and her partner, Charles Wilton, are the proud parents of William, one month old. They live in Ontario. Before he was even born, CTV News reported, a social worker at the hospital called the local Children's Aid Society (CAS). CAS decided the child was going to need 24-hour care because they didn't believe the couple were capable of caring for William. News reports say they threatened to take him away unless the couple found an "able-bodied" person to offer 24-hour care.

Maricyl and Charles agreed and now have that help, but they are fighting for the right to take care of their own baby as they choose. Would you want a full-time attendant in your home tending to your new baby because you weren't deemed fit? Right. Today, Maricyl and Charles are meeting with the CAS to present a care plan they've created with the Coalition for Persons with Disabilities. I can't even imagine how they must be feeling.


It just doesn't seem possible that this is happening in 2012.  Sadly, I think it shows just how deep-rooted misperceptions are of people with disabilities.

Like any people with cerebral palsy, Maricyl and Charles are affected differently by the condition. Maricyl has certain issues with hand mobility, though she can change diapers, breastfeed, and do the things moms do. Charles uses a power wheelchair. Both of their speech is affected; neither is cognitively impaired. They already receive some help from care workers. Seemingly, the couple is capable of handling an infant, and as William gets older and new challenges arise, they will deal.

Lest you think this is a Canadian thang, you might recall the story of Kaney O'Neill, a mom in her 30s from Illinois who's a quadriplegic. Her ex sued for custody of their son, Aiden, when he was 10 weeks old. While Kaney's issues necessitate having full-time help—she has minimal use of her hands and can't feel anything from the waist down—the bottom line was she was fit to mother her child. She won the custody battle, and now has a live-in caregiver, a service dog and adaptive equipment, per ABC News. "He adapts to my abilities," she's said of Aiden. "It's amazing. If he wants me to read a book, he brings it, puts it up on my tray."

As for Maricyl and Charles's situation, I am astounded by the misdirected efforts of those Canadian authorities. The agency should spend its energies protecting kids with drug-addicted parents and others who are in unfortunate situations; little William is not. Now, I don't know Maricyl and Charles but they seem like perfectly rational, reasonable, smart human beings. Both seem to possess those key things necessary to be a competent parent: Dedication. Common sense. LOVE.

But the bureaucrats see just one thing: a diagnosis of cerebral palsy.

What will it take for the world to see the ability in disability? The question haunts me. I desperately hope that as Max and all of our kids get older, perceptions will change.

"I'm disappointed," Kaney O'Neill told the news, "that the courts allow for someone to question your ability to have custody based on your disability."

UPDATE After the couple and agency met, per a CBC News update, the Children's Aid Society is backing off and is no longer threatening to remove William from his parents.