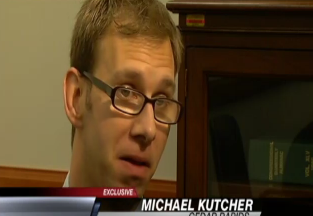 I never knew Ashton Kutcher had a twin brother, Michael, or that he had cerebral palsy. But now I do and I am wowed. Recently, Michael traveled to Washington, D.C., to push for more research funding for preventing CP. Michael has a mild form that affects his right side, hearing and vision. He's befriended an awesome little girl, Bella, who has more involved CP; she was there with him.

Some 764,000 kids and adults have cerebral palsy and nearly 8000 babies and infants are diagnosed with it every year, according to Reaching For The Stars (RFTS), a nonprofit that advocates for more CP research. It is the most common motor disability in children. And yet, there is no dedicated funding at the National Institutes of Health or the U.S. Centers for Disease Control for cerebral palsy research.

This was Michael's second trip to Washington as Executive Director for RFTS. Curious, I looked him up on LinkedIn because I like to hear what adults with CP do for a living—it inspires me. Michael works as an assistant manager a company that handles retirement services in Cedar Rapids, Iowa.

"I have to be the voice for a child that literally can't speak," Michael says.

A-men. It's great to have someone with smarts, heart and celeb cache (always a plus) advocating for kids. Cheryl Hines, who has a nephew with CP, is an ambassador for United Cerebral Palsy and on the organization's national board of trustees; she actively fundraises for them. Eva Longoria has a sister with an intellectual disability, and has lobbied Congress to prevent service cuts for those with ID.

"Keep moving the rock on CP on cap hill today brother! Love u much" Ashton tweeted to his brother the day he went to D.C.

"Thanks brother, crushed the rock today !!! much love" Michael tweeted back.

And now, I have a crush on both brothers (and Dave will have to deal.)

Here's how you can easily email lawmakers to support federal funding for cerebral palsy research; the goal is 100,000 emails by the end of May.
Ellen Seidman at 6:55 AM