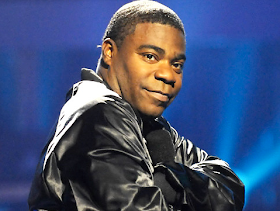 Ever since I read about Tracy Morgan making fun of "retarded kids," I've been seething. Today my friend Theresa emailed me, and I got livid all over again. "I always thought this jerk was overrated. And unfunny," she wrote. "Now I know he's clueless and insensitive."

After making anti-gay remarks a few weeks ago in Nashville (including the gem that being gay is a choice because "God don't make no mistakes"), Morgan was doing a stand-up routine at Caroline's Comedy Club. This time, his sketch involved poking fun at people with disabilities. "Don't ever mess with women who have retarded kids," he said. "Them young retarded males is strong. They're strong like chimps."

Huh?! He thinks that's funny? I know I'm not the most objective source, considering I have a kid with special needs, but that's just an all-out stupid comment. There's no funny in there.

Tina Fey came down on Morgan for his previous display of brilliant wit. "The violent imagery of Tracy's rant was disturbing to me at a time when homophobic hate crimes continue to be a life-threatening issue for the GLBT community," she said in a statement to TMZ. I wonder if she will say something about this, too. Perhaps Morgan should consider not talking unless Tina Fey's writing his lines for him.

A few months ago, when I wrote about tweeting at people who used the word "retard" on Twitter, comedian Carolyn Castiglia put up a post about how the word "retarded" is a mainstay of comedy acts. I say there are a whole lot of other words out there to choose from. The word "retarded" is demeaning to those with disabilities, even when it's not used in a directly derogatory way.

If people keep using the word in any context, people will keep thinking it's OK to use—even as an attack on those with disabilities. Worse, they'll think it's FUNNY.

Get a sense of humor, Tracy Morgan. Get a heart. And get a clue.
Ellen Seidman at 9:55 PM