Are you happy with your child's program/school? 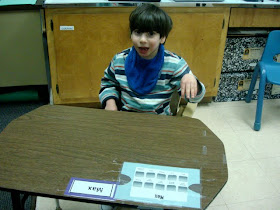 Max's school had a benefit gala on Friday, Casino Night. I had an amazing time, and not just because it was in a beautiful place and Dave and I dressed up and there was an open bar (hello, whiskey sours) and I got two blackjacks and also won a mini DVD. I just felt really happy knowing Max was in a school that's able to get this sort of thing together.

Max was in our state's Early Intervention program until he was three, and it spoiled us because we had three experienced therapists (physical, occupational, speech) coming to the house, along with a teacher in his last year in EI. When he aged out our district wasn't able to support Max's needs, so they bused him to a private school about 20 minutes away. I had picked that school after touring several, and decided it was the right place for Max because it seemed like a nurturing environment, the teachers were good and there were kids there just like Max. It was important to me that Max be in a setting with kids who were more advanced than he was (to give him aspirations) and kids who were less advanced (you know, to give him a superiority complex).

But here's what happened with that school: It was nurturing, yes. But turns out it was so not progressive or proactive. It was located down the block from a place where Max used to get aquatic therapy, and when I asked about the possibility of including aquatic therapy in his school program I was told the principal did not believe in aquatic therapy. Then came the communication device showdown. Max was 4. I told his speech therapist (who was the head of the department) that I thought he was ready for one. She said he wasn't. I asked her how she knew he wasn't if she'd never even tried one with him. Then I found out that the United Cerebral Palsy in our area had a lending library of them. "Wow, that's great!" she said when I told her, which is exactly what you don't want to hear from the so-called expert. Finally, I threatened to pull him out of the school if they didn't get him tested for a communication device, but really, by then it was too late. I was fed up with their retro ways; it seemed like they were actually holding Max back.

The new school that we found for Max is farther away, but it is outstanding. The teachers are totally on top of everything and caring, the therapists are enthusiastic and full of great tips, and they have excellent activities for families throughout the year.

I'd say if there's one key thing I've learned from seven years of working with special needs programs, it's this: Ask for more. Me, I wanted to give Max more than just a chance to beat the odds—I wanted to give him a million chances. I wanted to get him all the help and tools and guidance I could humanly get. I wanted those naysaying doctors at the hospital where he was born to eat Max's dust. So when Max was in EI, I asked for more sessions and eventually, I got them. I asked the insurance company to pay for more therapies and I kept badgering them until they met me halfway. At school, I've asked for more feedback: I asked his therapists to e-mail me each week about what they've been working on with Max and what I could be doing at home. And I asked his teacher to send home a list of activities she does in class so I can reinforce them at home, and now she sends a weekly "Learning Links" memo to all parents. OK, I can't say I do everything, but I do what I can.

How about you—are you happy with your child's Early Intervention program or school experience? What frustrates you? What important thing have you learned along the way?
Ellen Seidman at 12:05 AM