Would it be wrong to offer up your five-year-old as a giveaway? 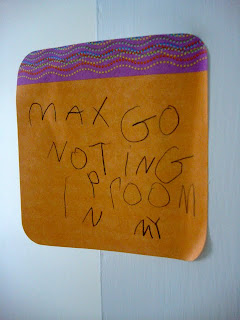 I'm leaving a message for a doctor's secretary: "Hi, this is Max's mom, I need to change his appointment, can you call me?"

As I hang up Sabrina, who's sitting nearby, says, "Why do you always say you're Max's mom and not Sabrina's mom?"

I explain to her it's because I'm calling about a doctor's appointment for Max, and she seems to understand. In the next few minutes, though, Sabrina starts going through my purse, finds my wallet, and notices that Max's photo is on top of the stack in the plastic sleeve. She rearranges them so her pic is first.

Then came the note above. She asked me how to spell it and wrote it out; you have to read it like one of those word-sort puzzles. It says, "Max not going in my room."

Sabrina seems to be more and more resentful lately of the extra attention Max gets. I go to great lengths to make sure I spend enough time with each of them. But Max needs help being fed, dressed and bathed. I have to explain certain things to him again and again. And approximately every five minute, when he looks at me with an expectant grin on his face, it's my duty to say, "You're Purple Max!" So, yes, he gets more attention.

I think this is why Sabrina's been acting rather obnoxiously. She's taken to crashing Max's therapy sessions, making it hard for him to concentrate. 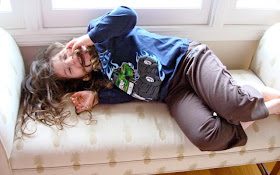 She's also been snatching Max's clothes. Not that she's ever been the easiest kid about dressing. For her class photo, she insisted on wearing a shirt that says, in sequins (half of which have fallen off), "Black is the new pink." She definitely stands out in the photo, that much I'll say.

Sadly, she's also been kind of mean to Max. Today she got mad at him and said, "Max, you don't like PURPLE! You only like BLACK!" OK, I guess that's not the meanest thing you could hurl at someone, but it upset Max, who vehemently shook his head no and said, "Ur-ul Max! Ur-ul Max!"

Tomorrow Max has to go to the doctor to get his ears checked (there's some fluid in one) and tonight I overheard Sabrina telling him, "Max, you're going to get a shot at the doctor tomorrow! In your face!"

She has been rather obnoxious to me, too, dragging her heels on doing things that I ask. Once, she called me a "brat." And she used the police threat again this weekend; when I told her she could not have ice-cream she said, "If you don't let me have ice-cream, I am telling the police!" She didn't specify what charges she would press against me, though I don't think failure to provide ice-cream is a punishable offense.

I have decided to kill her with kindness. 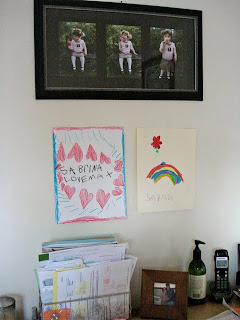 I started a Sabrina wall above my desk featuring her artwork and photos.

I sometimes put her to bed before Max, so we can have time to read books alone.

Thursday, we're going to the circus together.

I know, I need patience and understanding. I don't really have any plans to offer up Sabrina as a giveaway, because I don't think that complies with the new FTC guidelines for bloggers. But sometimes, I sure am tempted.
Ellen Seidman at 12:07 AM