Lots and lots of info on stem cell therapy 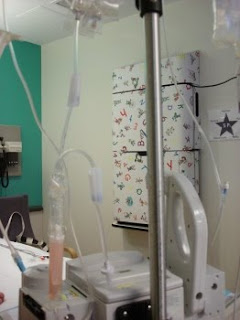 Those are Max's stem cells, above. Aren't they just beautiful?

As you can imagine, I had a ton of questions for the doctor who's spearheading Duke University's stem cell program: Joanne Kurtzberg, MD, Professor of Pediatrics and Pathology and Director of Duke University's Pediatric Blood and Marrow Transplant Program. She is a brilliant, progressive-minded doctor and a person who manages to be both matter-of-fact yet warm at the same time. She first started researching stem cell therapy for kids with leukemia back in the 80s. Since then, she's treated more than 1600 kids with life-threatening cancer, metabolic and blood disorders, using donor stem cells, and 120 kids who had neurological conditions such as hydrocephalus, brain injuries from falls or drowning and cerebral palsy, using their cord blood. The stem cells are injected into the arm or leg, but it's possible that someday, they will be injected into the brain. It is still unknown where the best injection spot is.

Right now, Dr. Kurtzberg is only using stem cells from cord blood to treat cerebral palsy because the risks of using ones from a donor, even a sibling, are too high. In order to make donor stem cells "engraft" (or take) a child needs to receive chemo, a process that takes two months and can be dangerous. Since cerebral palsy is not a life-threatening condition, the doctor says, the risks outweigh any potential benefits (unlike, say, leukemia).

Dr. K told me that stem cell transplants have helped kids with cancer and other diseases. She and her team were able to do a biopsy on the brain of a child who died 10 months after getting a stem cell transplant. It was her progressive neurological condition that ultimately killed her. In fact, when they looked at her brain, they could see that 40 percent of the cells had reached there. With kids who have cp, the results are less clear-cut; reports come in from parents, but they may not be the most objective source. There is a lot of misinformation out there. Remember that video of Dallas Hextell I mentioned a couple of weeks ago, a video that showed he was able to walk after receiving a stem cell infusionl? That video and story were misrepresentative; Dr. K said Dallas was walking before he got the stem cell therapy. But she says that she has heard of kids being better able to use their limbs, and improvements in speech.

Results can start showing up around six months after the infusion. I'll be e-mailing Dr. K every few months to tell her how Max is doing, and we'll go back and see her in a year. Before we go home today we'll be visiting a pediatric neurologist at Duke U., who will assess Max and then see how much he may change by next year.

Dr. K believes that stem cells are best administered as soon as possible after a brain injury has occurred. Two other stem cell infusions happened yesterday, and one of them was for a six-week-old infant. I didn't feel comfortable asking what had happened, but I was thrilled for that child. I only wish, as I've said before, I could have done this sooner for Max.

For now, treatment is still considered experimental and unproven (more on that below), but with help from champions like Dr. Kurtzberg, perhaps in the near future we will get proof that it works. Once that exists, more hospitals around the country would start doing this. And that would be tremendous. As you know, there is no cure for cerebral palsy. Not yet, anyway.

A few more questions Dr. Kurtzberg answered for me:

Can you give a basic explanation of how stem cell therapy is supposed to be effective?
"We believe that stem cells can travel to the brain and then help repair damage caused by stroke, low oxygen or other vascular problems. The cells may work in two ways, first by releasing hormones that calm down inflammation and also attract cells from the brain to heal damaged areas, and second, by providing stem cells to contribute to the repair."

What are your hopes for the state of stem cell therapy five years from now? Ten years from now?
"I hope that we first learn if stem cell therapy works and also the best way to use it. We need to know what are the best cells to use, what is the best place to give them and what dose is most effective. We also need to better understand when children with cp sustain their brain injury and how to detect it as early as possible. I believe that stem cell therapy will help children with brain injuries but I also believe that the earlier it is given, the more effective it will be. I think that it may be possible, in the future, to scan babies in utero or at birth to determine whether they have an injury, and then to treat them within the
first few days to weeks of life."

What advice do you have for parents who did not bank their child's cord blood at birth?
"First, these parents need to know that we don't know if cells help yet. While it's very hard to wait, that's what they should do. I can promise that if we find that cells do help, we'll next find a way to safely use donor cells for children who didn't have their own cord blood cells stored."

Can you give any information on the upcoming trial?
"The upcoming trial will enroll 120 children with spastic cp between the ages of six months to six years. They will be tested with an MRI, neurodevelopmental testing and a neurological examination before treatment. Children will randomly receive their own cord blood cells or a placebo for their first treatment. One year later, they will be tested again and will cross over and receive the treatment they did not receive the first year. They will be studied again one year later. The treatment will be blinded, which means that no one will know which treatment each child received first and second until the end of the study."

If you are interested in finding out more information on getting your child into the trial, which they hope to kick off this fall, you can contact the Director of Clinical Operations, June Allison (the woman is a saint) at allis006@mc.duke.edu.
Ellen Seidman at 11:00 AM