Max gets his stem cell infusion 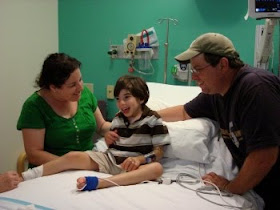 Stem cell therapy for cerebral palsy: Does it work? We're hopefully at the beginning process of finding out. I'm sitting here at Duke University Children's Health Center writing this as Max is watching Toy Story and vegging out. The stem cell infusion is done; it took all of nine minutes. The infusion started at 12:56 p.m., and ended at 1:05 p.m. It's such a crazy-short amount of time for all that anticipation; one nurse here described it as being like Christmas morning.

Max did amazingly, from the second we stepped into the day hospital at Duke at 10:30 this morning. The pediatric staff is wonderful. 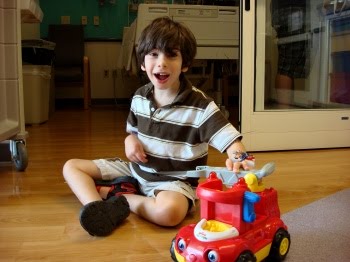 A nurse found him a truck. 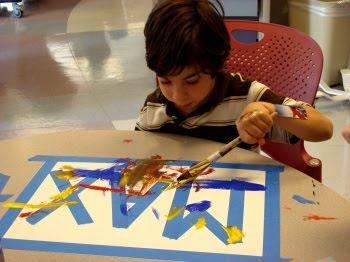 Mary Margaret, a sweet woman who works for a North Carolina program called Arts for Life—which works with hospital patients—did painting with him. 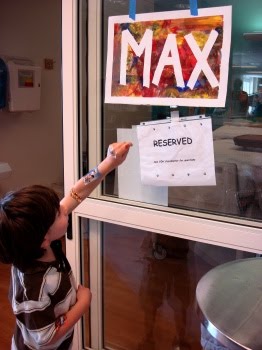 Max showed off his painting to everyone who passed by. Next, Max got down with the music therapist, Tray.

Then all of a sudden, a team of people showed up at the door: It was time for his infusion. Dr. Joanne Kurtzberg was there, assorted nurses and a camera crew, who were taping her for a TV segment. They asked our permission to tape the infusion and I said yes; I am all about spreading awareness of stem cell therapy, cerebral palsy, Max's cuteness, you name it.

Max only cried when they put the infusion needle into his foot. And then the drip started. I found out that there were 190,000,000 of Max's stem cells in the infusion bag, which sounded pretty damn good until I learned that a billion is not uncommon. Max had a relatively low number of stem cells harvested at birth; the amount gotten depends on a variety of factors, including the ability of the person doing the job to snag every last stem cell possible. So, we didn't exactly luck out in that department, though we were very lucky we had banked his cord blood at all. 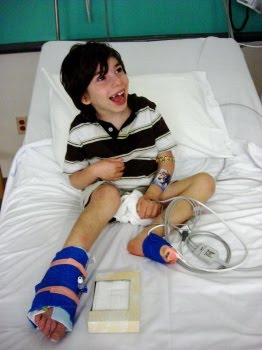 After the infusion, he was back to his usual happy camper self. We'd been told his breath might have the scent of creamed corn, and sure enough, Max smelled like a Thanksgiving side dish.

I'd been a little worried about how Max would react to being in a hospital; he was a trooper. I was a little worried how I'd do, too. I'm sure many of you know just how hospital settings can conjure up painful memories. But I was fine. I am now able to say things like "an intern in the NICU noticed his leg twitching, and that's when we were first aware something was really wrong" and "the doctors said he'd had a large bilateral stroke" without shedding a tear. But one thing that got to me was seeing other kids at the day hospital undergoing treatment. There were a lot of kids with cancer. A sweet little three-year-old girl was so puffed up from chemo, and I felt sad for her and for the hell her parents were going through.

I've learned lots about stem cell therapy, which I'm excited to share with all of you. But first, here's a snippet of the infusion. It was pretty uneventful—and that's a good thing. SWIM, you stem cells, SWIM!!!