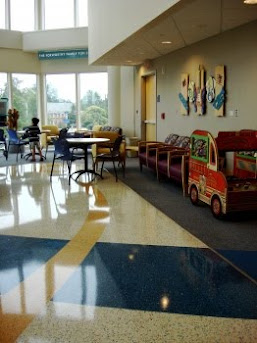 I have mixed feelings about visits to the neurologist. I fear hearing negative news, but then I love the high I get when he tells us good stuff. We see Max's about twice a year now, and that's plenty for me. For the final part of Max's stem cell infusion, yesterday we took him to see the chief of the division of pediatric neurology at Duke University School of Medicine, Dr. Mohamad Mikati.

Back when Max was an infant, I couldn't see enough doctors. I wanted answers, answers of any kind, about what the future held for him. The problem was that some doctors were more pessimistic than others, and they'd only make me horribly anxious. Eventually I came to accept that no doctor was capable of giving me that information, because nobody knew for sure how Max's little brain would heal from the stroke.

Doctors most definitely don't know everything about neurological conditions; the brain is still largely a mystery to them. I felt my usual trepidation. Was Dr. Mikati going to be one of those grim docs? Would he see something troublesome that our usual neuro hadn't seen?

Max trotted around the office, making friends with the staff and other patients. For a while, he pretended to be an airplane. Then he made a nurse take his blood pressure twice (even though she didn't need to take it at all) because he liked the feeling. Weirdly, the kid also loves to have his ears examined with that ear thingamajig. He points to it in doctors' offices, expectantly.

The good times didn't stop in the waiting area. This doctor, in his sixties, had seen lots of Maxes in his life (our beloved neuro is wise, but younger). After asking a bunch of questions about Max's development and how he's doing now, he told us he thought Max's speech would keep getting better and better, and that he would eventually be able to completely communicate through words. Perhaps not complicated sentences; instead of saying something like, "I'm really in the mood for a beer right now," Max might say "I want beer" (that's my example, not the medical one).

Then I asked the one question that I know I shouldn't ask, but I couldn't help myself. Because as hard as I try to not look into the future, it is the thing I always wonder: "Based on kids you have seen like Max over the years, do you think Max will be a functional adult? Will he need to be in one of those special homes?"
The doctor looked at me kindly and said, "Max will come along. While I cannot say for sure, I think he will be mainstream."

No doctor had ever dared say that before. I realize it's just one doctor. An experienced doctor, yet just one doctor. And, of course, he could not be certain. But, WOW. Holy, holy wow. I felt the tears coming, tears of happiness.

He didn't take my question the wrong way. He said, "The little boy I saw before you? I did not have such optimistic things to say to his parents. But for Max, I have a lot of optimism. I can see the brightness in his eyes."

After, Dave, Max and I drove to the airport, boarded the plane and as it took off, our spirits were soaring into the sky, right along with it.
Ellen Seidman at 12:05 AM