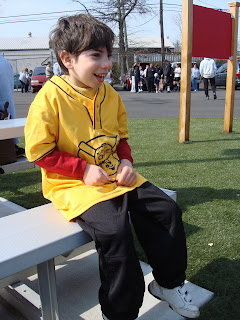 So, Sunday morning was Max's first baseball game, ever. We got him onto a Little League Challenger Division team. Dave and I left Sabrina at home with my sister and took Max, so we could give him all our attention.

Max basically wigged out for the first hour. Even though he loves baseball, he still gets unnerved in new settings. There were a lot of kids and parents running around, and lots of cheering. 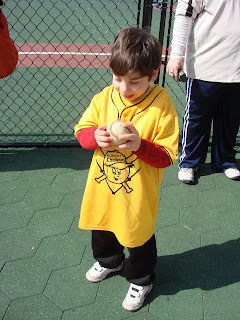 He did calm down for a few minutes and tossed a ball around. But then he realized he needed to wail, so he went back to it.

Every kid was assigned a volunteer teen. There were also several coaches on hand. One of them, Kim, finally grabbed Max and took him, wailing, onto the field. Where he continued to wail and look around for us.

That's when I got into a conversation with Marge, the woman who started the team. Years ago, she went to find a baseball team for her daugher, who has disabilities, but she couldn't a team who would take her. So she started fundraising to build a field. And an amazing thing happened: a local woman who had lost her 26-year-old husband in the Pan Am flight that crashed in Lockerbie, Scotland read a story in the paper about Marge. This woman had won a settlement after her husband's death. And she donated the money to build the field. Incredible, right?

So, Max kept crying. Finally, I decided he'd had enough and grabbed him. And then, of course, he did the sign for "more." 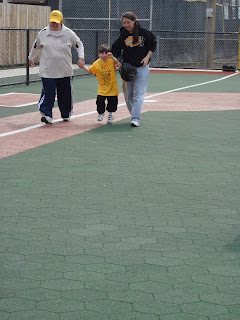 After that, they got him up to bat, helped him hit the ball and he ran the bases. 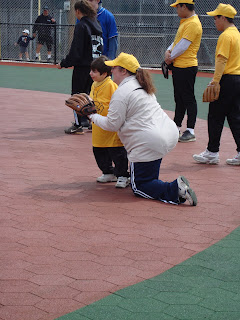 Then he played the field. 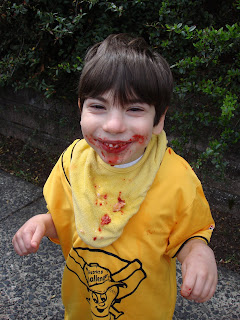 Then he'd really had enough, so we made our way over to the snack table and he downed one croissant and one jelly donut. 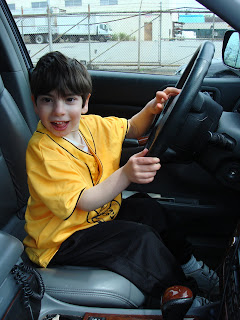 Then he drove us home.

Dave hasn't said much, but he's thrilled. I know he's felt bummed over the years that he didn't have a little boy he could play sports with in the way he'd always imagined. Now, Max has the baseball bug. We went over to Target and picked up a tee ball set along with a lightweight bat and balls he could easily grip. And he played with it the entire afternoon and until it got dark, squealing with joy. Sabrina didn't even try to hog it (OK, she was preoccupied with the new Ariel doll we got her after the last one had an unfortunate encounter with Flarp).

It was a day none of us will ever forget. 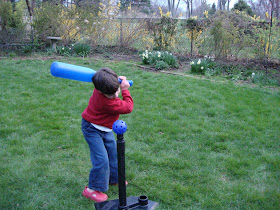