Worrying too much? Here's help for anxiety 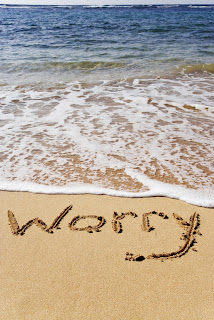 A few weeks ago, I was roaming around the web and found an expert who specializes in helping worrywarts—Audrey Sussman, Ph.D., director of The Anxiety Control Center. I e-mailed her to see if she'd answer some questions, and she kindly agreed. Disclaimer: If you are feeling freaked out all the time, you may need real professional help. This is just my little blog.


So, why are some people more prone to worrying than others?
People react differently because of deeply-rooted emotions and beliefs, which become filters for their perceptions. When a person reacts to an event, it is often not just the present-day situation they are reacting to, but an entire chain of emotions going back all the way to childhood. As children, we develop patterns and coping techniques intended to help us deal with stress or protect us from danger. For example, I had a client who felt that if she didn't worry something bad would happen. She grew up with an alcoholic parent and, as a child, had to run every possible consequence through her mind to make herself feel safe. Even as an adult, she still found herself consumed with worry. The circumstances had changed, but the thought pattern hadn’t.

Is worrying ever a good thing? Some of us are very talented at it.
Despite all the negative feelings attached to it, worry can serve a positive function when it prepares you for possible future difficulties. It can alert you to things that need to be taken care of, or of consequences of certain actions. Worry can keep you watchful for symptoms that indicate a possible problem, or it can motivate you to take positive action to improve the quality of your child’s life. However, once you have done everything in your power to anticipate and prepare for problems, worry ceases to serve a positive function. When your thoughts cycle into negative, scary future possibilities about things that are outside of your control, it is time to learn techniques to stop worry from putting another hardship in your life.

Got any simple techniques for stopping a worry in its tracks?
Yes, an excellent exercise called the "2 for 1" technique. It draws upon the same powerful imagination that you use to create negative stories, but instead you use it to create positive thoughts. Say you're sitting on the couch at night, troubled because that day, your child had a playdate with a typically-developing and your child's delays were really apparent. Do the following:

I'd love to hear an example of a patient who effectively used the technique.
There was a parent I was working with whose son had recently lost part of his hand in a fireworks accident. As she watched him struggling to tie his shoe with one hand, she found herself spinning into a terrible worry cycle. In her imagination, she was moving from the facts of the present moment to a whole range of terrible thoughts and worries: Will he be able to function in a job? Will he be accepted? Will this accident change his cheerful personality? She also found herself remembering traumas from the past—remembering how other people had looked at him in the emergency room, and even thinking about how she’d been teased as a child and worrying that it would be yet worse for him.

Before she allowed this cycle of worry to overtake her, she tried the "2 for 1" exercise. She started with the facts of the present event: Her son was struggling to tie his shoe. She then wrote down all the negative thoughts that were passing through her mind, and replaced them with positive ones. She thought about the things he did well, his keen mind, his energy, his goofy sense of humor, she imagined him playing with his friends, thought about jobs in which he could be successful, even imagined him graduating from college and getting married.

And as she did so and stopped the cycle of worry, she noticed something that surprised her: the proud smile on her son’s face as he bounded up to her, his sneakers tied in a knot. It was then that she realized it wasn’t her son who was struggling. It was her.

That technique sounds good. But I have to ask, what if you really, really, really believe that the thoughts you have might come true?
Both the positive and negative thoughts you create about possible future events are fictional. The problem with negative thoughts and pictures you create in your mind is that even though they possibly will never happen, the unconscious mind nevertheless accepts them as if they are true. And you react with fear in the present moment to something that hasn't even happened. In the same way, when you create positive thoughts, the unconscious mind also accepts them as true, creating a reaction that opens you to the positive possibilities. Positive and negative thoughts both spring from the same place: your imagination. They are simply stories. You have the power to control your mind. So as long as you make up stories, you might as well choose ones that can serve you in a positive way.

What's your best piece of advice for parents of children with special needs?
Parents of special needs children have many stressors that never even enter the minds of other parents. In fact, many times it is the parent who suffers more than the child, as they struggle to reconcile their dreams for their child with the struggles of everyday life. Amazingly, children have a way of taking even the most difficult, frustrating situations in stride. The best thing you can do for your child is what you are already doing: encouraging him or her, being proud of each accomplishment, and celebrating—and enjoying—what is unique about your child.


Photo from istock
Ellen Seidman at 12:43 AM