When is it OK to leave your teen with disabilities home alone? 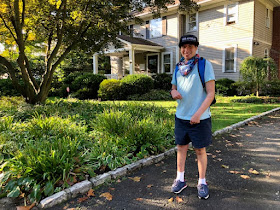 Some days, Max is more responsible than I am. He remembers that he needs to take his meds. He knows when his music therapy class is scheduled and lets us know. He asked the other day why his teacher hadn't yet given him any homework.

In similarly awesome news, Max's independence has really taken off in the last year. He is now walking places on his own (he has an AppleWatch to stay connected), grabbing his own drinks of water and regularly reminding us of his plans to relocate to L.A. sooner rather than later.

So it would seem at odds that I have qualms about leaving him on his own at home for periods of time. But I do.

This weekend, Sabrina and Ben wanted to hit the drive-thru Starbucks. That is what counts for adventure these days, and I am always in the mood for a decaf mocha frappe. Max preferred to hang in his Max Cave, aka our basement.

Dave was away, and I hesitated to leave Max alone.

Sabrina tried to cajole him into coming but, nope.

While there are no developmental guidebooks for children with disabilities, given that every child develops on their own timeline and in their own way, these days I struggle with the lack of a handbook for raising a young adult with disabilities. It is a tough balance between letting Max have his freedom, making sure he's safe, and learning to let go.

The Starbucks is 15 minutes away, but with ordering and coming home we'd be gone for about 45 minutes, maybe an hour with traffic. I haven't yet left Max alone for that length of time. I decided it would be OK, although some worst-case scenarios ran through my head as I drove off. I had to work through them.

In case of emergency, would Max be able to get out of the basement fast?

Yes, he is capable of getting up the stairs and opening the front door. He would know to text us, and he knows to dial 911.

If someone rang the doorbell, would Max know not to open it to a stranger?

Yup. We've had that conversation, he understands.

If he needed to use the bathroom, would he be OK?

Shoot, should have checked before I left, but he can handle it to some extent.

What if he has a seizure?

For that, I had no answer. Max's seizures are under control with meds. And in the end, I have to trust in them, too.

Even if Max's life skills and physical skills are not at an 18-year-old level, he has maturity and smarts on his side. In the end, I trusted in him. And in the fact that because he can be a total couch potato, the time would zoom by and he wouldn't even wonder where we were.

Sure enough, we went, we Ventied, we returned. Max was exactly where I'd left him, watching iCarly.

"They have Starbucks in Los Angeles," he helpfully pointed out.

To be continued, as always.