Tough-love parenting for the win 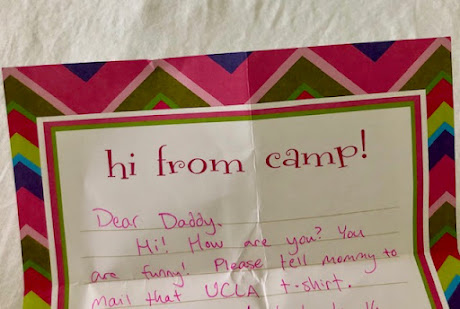 Max is usually grinning his head off, dancing or doing both in every photo and video from camp. I'd been eagerly awaiting letters from him, and a couple recently arrived. Mainly, he wanted to find out when we'd next be visiting Los Angeles and he wanted me to mail him his UCLA sweatshirt. Max may be at camp, but he left his heart in Los Angeles, the place where he'd like to live.

I didn't recognize the handwriting. Hmmm.

Max has, in recent years, been insistent on writing out classwork and homework instead of typing it. And his handwriting has really improved. I knew what was happening at camp: Why should he go to the trouble of writing if one of his awesome counselors could do it? It is entirely possible they had offered, and he took them up on it. Or maybe they assumed, because in the past counselors have written them for him. Or maybe he asked. Heck, we all get lazy during summer.

Summer school is traditional for many students with intellectual disabilities because regression can be an issue. The academic kind has never been a problem for Max, one reason why we're fine with sending him to camp instead of school. But now, I wondered if a different kind of regression was happening. Max has been on such an independence surge for the past couple of years. And while maturity for him also means asking others to lend a hand when he needs it, I wanted to make sure he wasn't being coddled.

This is the line I walk as the parent of a young adult with cerebral palsy. It happens at home with tasks, too, where it's natural for Max to be codependent...if we let him. Max, you can put your clothes in the hamper. Buddy, you can brush your teeth.

The staff at the camp are beyond nurturing and caring; it is pretty much the only overnight camp program we found that was willing to take campers who needed assistance with life skills such as dressing and showering. They're super-encouraging, too (check out this video of him shooting hoops), and want what's best for Max. I just wanted to make sure they kept in mind that letting him do stuff himself is good for him. I texted the amazing program director to say that Max was capable of writing his own letters, and to encourage the counselors to have a can-do approach.

This could very well mean I won't be getting more letters, I guess—but I'm feeling pretty confident that anytime soon, we'll be getting a note from Max asking when we're going to L.A.