In honor of Max's 18th birthday: then and now 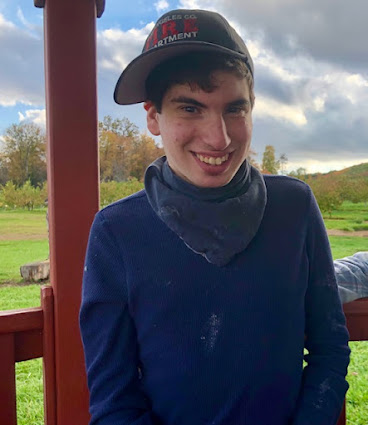 "How is that possible?!"

Friends and family can't fully believe that Max turned 18 today. Me, either. In some ways, his birth doesn't feel like that long ago, because I so vividly and viscerally recall each and every part of what happened afterward. And then, there's Max—my sunshine-y, bright, handsome, determined, charismatic, charming, kind, funny, big-hearted firstborn. The living proof that despite all the grim prognoses, tears, grief, and anxiety, he turned out just fine. More than fine. Super-duper-extra fine.

This is a celebration of just how far he's come.

Then: I was despondent that our little guy wasn't going to get to enjoy life like other kids did.
Now: I'm grateful that Max is living his best life, other than the fact that he hasn't yet been able to move to Los Angeles (his dream destination). He enjoys hanging at his grandparents' house, eating lots of steak and baked ziti, watching Victorious on TV and fire truck videos on YouTube, doing yoga with his aunt Emily and practicing karate moves with Dave. He's been to Disney World and Disneyland, and generally loves to travel. He's had a bar mitzvah on his terms. He goes to summer camp. I wouldn't say he feels there is stuff he's missing out on or that I, as his parent, do. I sometimes wonder if he might someday have a relationship and get married, but: Whatever will be, will be.

Then: I filled the basement playroom with developmental toys in desperate hope of helping Max come along.
Now: Max has taken over the basement (aka The Max Cave) and allows us to enter on occasion.

Then: In Max's first year, as I drove him to therapists and specialists, I sometimes had to pull the car over to the side of the road because I was crying so hard. It worried me that he wasn't gurgling in the back seat or coo-ing like typically-developing babies did. The silence in the car was oppressive.
Now: Max and I chat away while driving to appointments. There are questions: "Why did you want to move to New Jersey? It's cold here! Los Angeles is warm!" Opinions: "New Jersey is disgusting!" (We got him the t-shirt for Chanukah.) Observations: "Ugh, all the leaves fell off the tree, I hate winter!" And pure teen outrage: "I didn't get to go to Los Angeles for my birthday"). 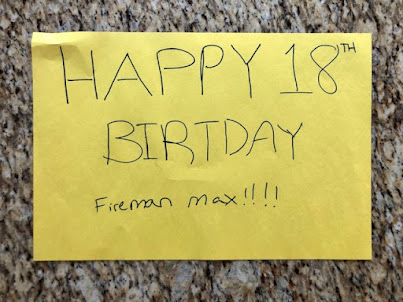 Then: Wondered if he would be able to read.
Now: This morning, Max kept pointing to the birthday sign on the kitchen table that his bro and sis left for him. Finally, I walked over and realized what he was saying: "There's no 'h'!'"

Then: I'd watch Max's movements like a hawk and wonder if they were normal. I'd watch other kids like a hawk to compare Max to  them.
Now: Max works around his physical challenges. He clutches plastic cups with all his might, fingers sometimes bent, but he does it. He sits on his butt to get down to our basement steps. If he needs to pick up a piece of paper or an object, he will try, try and try again until he succeeds. There's no need to compare Max to anyone because I know he is capable of doing things in his own way. That is what you call ability.

Then: Freaked out when a relative suggested that our little guy smiled a lot because he was "simple-minded." Both because if was offensive, and because it struck a nerve. We knew that Max was at risk for cognitive challenges when the pediatric neurologist in the hospital told us he'd had a stroke; we just weren't sure what that meant.
Now: Max's mind is anything but simple. He's sharp and observant. He's a whiz on iPads and other technology. His emotional IQ is sky-high, and if he sees me upset about something he'll ask, "Are you OK?" He is the person in our family who's best at driving directions and the one most likely to remind us all to grab a mask when we are leaving the house. Like any person's brain, his works in its own unique way. He tends to develop obsessions, then go all in on them. This started at around age 6, when he fell in love with the color purple. Fascinations with Lightning McQueen, car washes, firefighters, the color red, Las Vegas, and Los Angeles followed.

Then: Winced when little kids would ask "Why can't he talk?" right in front of Max.
Now: When kids ask that, I turn to Max and say, "Max, tell them you can talk!" And Max will say something—"I can talk!" or "I want to move to Los Angeles!"—and grin.

Then: When Max was around 5 I had to beg the school speech therapist to let him try a communication device, because she thought he wasn't ready.
Now: Max shares thoughts in Zoom chat during virtual school sessions, and uses a speech app when class is in session. He types thoughts into his Apple Watch if his speech isn't understood. Max makes his needs, wants, wishes and All The Things known.

Then: Wondered when Max would be able to reach milestones.
Now: We pretty much know what Max is capable of, more than we ever dreamed. Experts will tell you that the younger years are critical for development, but I am here to say that even at 18, an adult can still
still be full of potential and continue to make progress. In recent years, Max has learned to step out of a car alone. His handwriting has improved. He can often get a jacket on by himself. Just as great: He asks for help when he needs it.

Then: Max's sensory issues meant we could only go to the same restaurant in our neighborhood and had to sit in the booth in the back, by the bathroom, every time. He wouldn't go to performances or movie theaters, either.
Now: The pandemic may be preventing him from going to events and movies, but nothing's stopping him and his dad from driving around in search of great restaurants with outdoor seating areas or good takeout.

Then: Instead of enjoying the birth of our first child, we were sucked into the hell of the NICU.
Now: Today, as I watched Max giggle as we lit his ice-cream birthday cake at lunchtime and his teacher and classmates sang Happy Birthday to him from his iPad screen, I grinned and felt his joy and mine, too.

We have so much to celebrate. 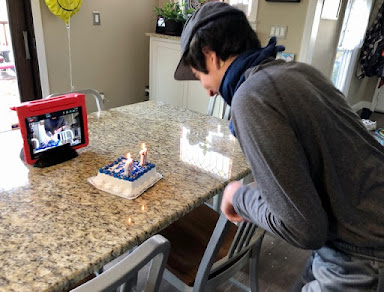