A visit to a new neurologist 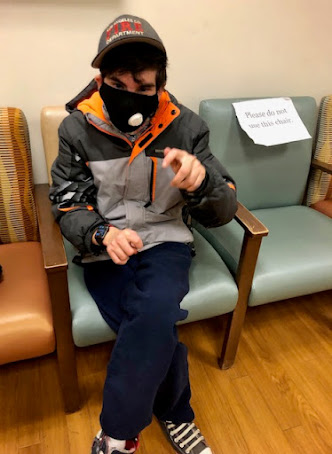 After years of seeing the same pediatric neurologist—he first saw Max when he was two months old—we had to find a new one. Max turns 18 this week and the doctor advised us to find an adult neuro. This was not something I was gung-ho to do during a pandemic, but I asked around in my local Facebook group and a good number of people recommended the same person. Our pediatrician knew and liked him, too. He actually had available appointments. And so, I took the afternoon off work yesterday and off we went.

Max was a bit perturbed that he was missing his virtual music therapy session, but was placated when I noted that he'd have a whole new person to talk to about his goal of moving to Los Angeles. I hoped that I wouldn't lose it when the doctor asked about his history. Sure enough, the second Dr. G. said "So, tell me Max's story," I welled up. It's been eighteen years and that time is still raw in my head and heart. I took a deep breath; I did not want to cry in front of Max.

And then it occurred to me: I didn't have to tell Max's story, he could.

"Max, let's tell the doctor where you were born!" I said.

And I filled in the hospital, the stroke and the seizures.

"But now you take medicine and you don't have seizures, right, Max?" I asked.

I explained that he likes to down his pills with cider, his beverage of choice.

"He also likes milk," I noted.

"He likes the taste of beer," I explained, lest our new doctor think that we were letting Max party during the pandemic.

I mentioned that Max has had therapy since he was two months old.

"I have Amanda now!" Max noted. (His music therapist.)

"Yes, we are going to try to reschedule," I said.

At that point, Max decided to text Amanda himself on his Apple Watch. While he was distracted, I talked a bit about how grim the doctors had been about Max's prognosis and how far he's come.

"He is so bright and he's got a really high emotional IQ," I said.

"Yes!" Max confirmed, picking his head up from his watch.

And that's how our visit went. I'd say something, and Max would give his two cents or opinion. He quickly informed the doctor of his plans to move to Los Angeles.

I explained he had a favorite steakhouse there.

I explained he had a favorite fire station there, too.

Then we talked about school.

Max legit loves it, but because he likes to act cool he said, "It's ohhh-kaaaay."

As the doctor and I talked—about what schooling was looking like these days, Max's history of seizures, his meds—Max continued to focus on his Apple Watch. I figured he had started to text Dave.

"Is he social?" the doctor asked.

"Yes, very much so," I said. "Dave likes to call him The Mayor of his school!" and recalled how one time when Dave had dropped him off, he watched in awe as Max walked to class by himself and waved happily to every person who passed him by.

I mentioned that Dave was his best friend, and they loved to go on eating adventures together. I pointed out that Max enjoys traveling. At that point, the good doctor asked if Max had been to Los Angeles. He did not know what he was in for.

"You were born there?" the doctor asked.

"No," Max said. I explained that he meant he'd like for Los Angeles to be his home.

"I need to look for a house there," Max said. "A BIG house," and he waved his hands in the air.

The doctor didn't understand what Max had said, so I translated. I noted that Max often uses a communication device at school (or the Zoom chat), but that outside of school he preferred to articulate his thoughts or spell out words on his watch.

Finally, because we were seeing a neurologist and not a travel agent or realtor, I shifted the conversation to a discussion about a program Dave and I were considering for Max. An occupational therapist a few towns over is running a life skills program that meets for five hours at a time. Max had tried it out and loved it. There were only a few other students there, all socially distanced, and the practice was stringent about safety measures. Should I send him?

The doctor's response: no. Although Max's CP didn't necessarily put him at additional risk for complications from Covid-19, his blood-clotting mutations could be trouble as Covid causes clots. "The vaccine is on the horizon—hold out," he said, validating what we'd figured was ultimately best for Max.

Dr. G. examined Max, checked his reflexes (excellent!) and noted that his feet were on the stiff side (standard for Max). Then he asked Max to take a walk in the hallway. I recalled the time an orthopedist had asked Max to do that and Max said, "Let's race!" He admired Max's walking, and my heart flip-flopped because after all these years, I have never taken it for granted.

The doctor wished Max a Happy Birthday, and Max noted that he was planning to be in Los Angeles next year for his birthday. We strolled out of the office, arm in arm. We stepped outside the building.

"It's SO COLD here!" Max announced. "Los Angeles is better!"