Calm down, he said 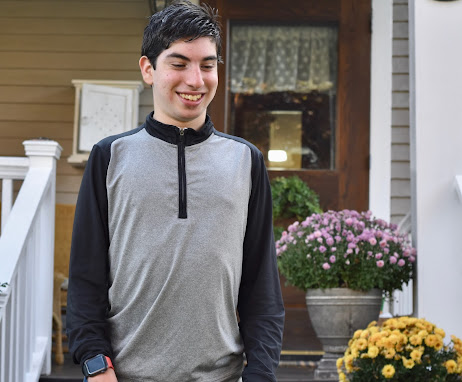 We've all been blaming 2020 for anything bad or bizarre that happens, but that wasn't the case the other day when Max had an accident. Although it happened during a work zoom call, so I guess it was in keeping with this year.

The stairs in our house make me nervous. Although we have banisters, the steps wind around a curve. Max first climbed stairs on his own at age 9, while we were on vacation. That ability is something I've never stop appreciating because it is quite the feat of fine-motor skills. He still likes to scramble up on his hands and knees, especially if nobody is there next to him to give him a hand—he feels most secure that way. But as he's gotten taller, he's occasionally gotten stuck on steps, unable to propel himself forward. His school physical therapist has worked with him in the building's stairways, but Max has been learning virtually since March.

I have an awful stair story in my head. When Max was a baby, his physical therapist told me about a mom who had tripped and fallen down the stairs holding her infant. The baby fell out of her arms and sustained brain damage, and that is how the therapist had come to treat him. This is a core reason for my stairphobia.

The day Max fell, he had been going up the stairs in socks (which he usually doesn't do) and had slipped and fallen.

"Does anything hurt?" I asked.

"No!" he answered as I checked his back to see if it looked OK.

Max stared at me, my face contorted with worry, and the sitter.

And with those words, the sitter cracked a smile and relief flooded through me. Because Max did seem OK and, as the coming days revealed, he had not gotten injured (lucky). Because, being Max, he cares so much about other people's well-being and wanted to make sure we were OK even though he was the one who'd nearly gotten hurt. And because my boy was mature enough to express it.