Including people with disabilities in voting starts with all of us 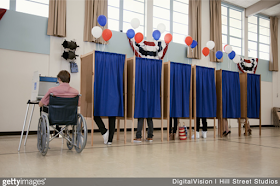 Yesterday my friend Cindy drove a man to vote in the Iowa Caucus. Cindy is someone I've only ever met online but she happens to be one of the better people in this world. That explains how she ended up escorting Raymond, who lives in Des Moines and needed a ride because he's in a wheelchair and the caucuses are notably inaccessible.

Vox ran a story a couple of days ago about the situation. Paper ballots are not an option, so voters have to travel to one of the state's 1,678 precincts to participate. The rooms are crowded. Seating can be an issue. As caucus-goer Emmanel Smith, an advocate with Disability Rights Iowa, told Vox, "If somebody backs into my wheelchair and falls and topples me, I'm going to get badly injured."
Smith and the people he works with hosted their own caucusing event, after having learned the rules.

The lack of accessibility at the Iowa Caucuses is reflective of the bigger problem this country has with disabled voters and voting.  This post by The PEW Charitable Trusts summed up issues that include untrained poll workers who may not correctly operate accessible voting machines (if at all), places that may not be wheelchair-accessible at all or provide adequate privacy for voting, and  limited access to registration materials, too. How undemocratic is that?! Not to mention the fact that politicians have often failed to reach out to the disabled population.

There is progress. Despite the challenges voter turnout is on the rise—it surged 8.5 percent in 2018, per a report released by researchers at Rutgers University. This year marked the first time an Iowa Caucus was lead in American Sign Language, reports The Guardian. In 2018, OmniBallot—an accessible online voting system available via computer, tablet or smartphone—was deployed in more than 400 election jurisdictions in America, according to Voices.com. Since its launch in 2015, more than 1 million voters with disabilities have used the system, notes the Zero Project, a nonprofit focused on the rights of persons with disabilities globally.

Max turns 18 in December, a month too late to vote. But I'll be taking him, Sabrina and Ben with me when I cast my ballot. Sabrina and Max were in the booth with me  in 2016, and they each pressed the buttons. This election, I'm hoping to help Max better understand the whole process. He thinks Donald Trump is a laugh riot, because he and Dave used to watch the Alec Baldwin skits on Saturday Night Live and Max remains convinced Alec and Donald are one and the same. Hmmm.

If you'd like to help with rides this election year, or are a voter with disabilities or know someone with disabilities who will need a ride to vote, reach out to Carpool Vote and Drive the Vote. You can also search this nationwide list of volunteer transportation providers, or reach out to the campaign office of local candidates. My friend Cindy had heard that ground support was needed in Iowa, drove there from Chicago and through Elizabeth Warren's campaign got a list of people to call who needed rides.

#CripTheVote, a nonpartisan campaign aimed at getting candidates to address issues relevant to people with disabilities cofounded by Andrew Pulrang, Gregg Beratan and Alice Wong, is holding a twitter chat on debate accessibility on February 12 at 7 PM Eastern Time (4 PM Pacific/5 PM Mountain and 6 PM Central). Here's more information on that. And for other inspiration and resources, check out the REV UP Campaign, launched by American Association of People with Disabilities to promote voter turnout.

Oh, and also check out this video series by Samuel Habib, a disabled young man (some of you might know him from the film Including Samuel) who's been meeting presidential candidates and and asking them about disability issues.
Ellen Seidman at 3:11 PM