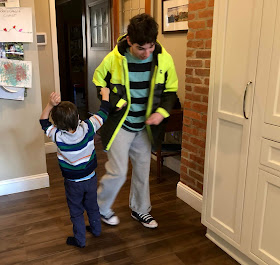 I was driving Sabrina to a friend's house this weekend when Dave called. He'd taken Max and Ben out for lunch. "THE BOYS ARE ABOUT TO KILL EACH OTHER!" he shouted. In the background, I could hear yelling.

Assuming that things were not actually going to get lethal, I told Dave to call back because I was driving. Sure enough, when he did the boys had calmed down. But I totally got how freaked out he was: Seeing your kids fight is the worst. And Max and Ben are going through a fighting phase. For anyone who wonders whether families that have a child with disabilities are typical, you'd have to see these boys going at it.

Mostly, they're competitive. They both want to be first everywhere—first to be dressed on weekend mornings, first to the car when we go out, first into the restaurant, first to the door of our house when we get home. Max has had these impulses over the years but now Ben has the "I'M FIRST!!!" bug, bad. And they can get physical: Ben will swat at Max's butt or push him. Max will whomp Ben on the head. They'll both roar and shout. When Ben is losing it, he'll take a flying leap at Max and then Dave or I will have to separate the two of them.

We have been down this road before. Max and Sabrina had their fair share of squabbles, too, and now they're mostly pleasant to each other. Although for Sabrina's birthday yesterday, all Max wrote on her card was "I want to move to Los Angeles, CA."

I think back to when I was growing up, and how much it pained my mom to see my sister and I fight. We sometimes went at it like Max and Ben do, yelling and hitting and all. I can hear her now, close to tears: "GIRLS! Stop fighting!" My torture of choice was chanting to my sister, "You're not going to have a birthday party! You're not going to have a birthday party!" Ben and Max torture each other with mentions of Los Angeles, where Max hopes to someday move.

Max to Ben: "You're not moving to Los Angeles with me!"

Ben to Max: "You're not moving to Los Angeles!"

We try to even things out: Ben can be first in the car, Max can be the first into the store. "Try" being the operative word. I'm not particularly concerned; I figure they'll grow out of it. They have their moments of sweetness. Typically, Max will lean over and kiss the top of Ben's head. Ben will say "NO!" but then he'll grudgingly give in, and that's how it goes.

The other day, Ben and I were at home doing some cooking together.