Halloween through the years and how far this boy has come 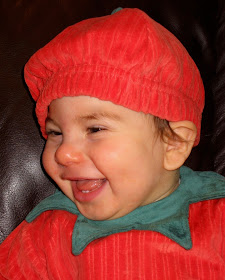 "Halloween is my favorite holiday!" Max announced the other day, out of the blue. He was genuinely excited to go trick-or-treating. His costume: a Los Angeles baseball cap. Because he's hoping to move to L.A., and wants to make like he's a resident.

Holidays are markers for me of Max's maturity. Because they happen just once a year, I get real perspective on how much he's progressed since the last celebration. This is especially true of Halloween, which Max struggled mightily with when he was a kid: It was too overwhelming, too scary, too tiring—sensory overload central.

As with many things, I had to accept that Max wasn't going to do them the way other children did. Eventually I realized that it just didn't matter, because Max was living and enjoying life on his terms, whether or not he downed candy, attended our town's Halloween parade, went trick-or-treating or wore a costume. 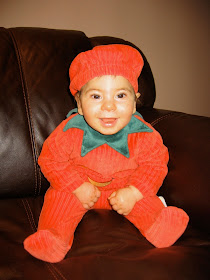 On Halloween 2003, when Max was 10 months old, a pumpkin costume looked especially great because it matched the orange tint of his skin owing to (no joke) his fondness for sweet potatoes.  I remember being so excited to dress him up, like any other tot. He may have been developmentally delayed but his cuteness was right on track. 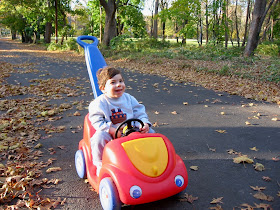 On Halloween 2004, he went for a drive around the neighborhood as other kids trick-or-treated around us. The town's Halloween parade had freaked him out and he wailed and cried. He didn't want to put on a costume. I remember feeling so sorry for our little guy that he couldn't even enjoy candy, a basic right of childhood. Back then, so much made me despair. 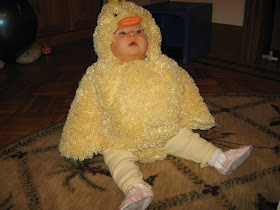 In 2005, Max had the sniffles so he stayed home with our sitter and we took Baby Chick Sabrina out for treats. 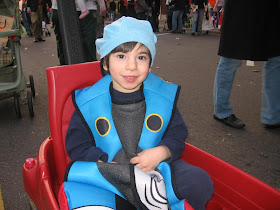 In 2006, Max was all about Thomas the Tank. We cruised around the neighborhood in a wagon, and while he didn't get exactly what was going on, he was pretty chill. Progress! 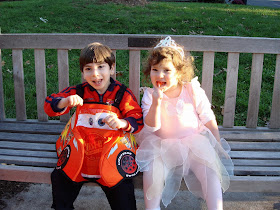 In 2007, Max dressed up as his favorite character, Lightning McQueen. It was the first of several obsessions to come; we wore out several DVDs because he watched it so much. Later, he would progress to being really into the movies Cars 2, along with every single piece of merchandise associated with it. 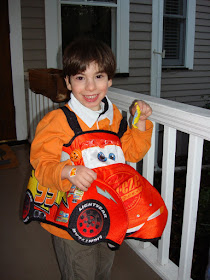 In 2008, we got more mileage out of the Lightning McQueen getup and Max worked really hard at grasping candy in a bowl and handing it out to kids who stopped by. I was so proud of him. LOOK AT THAT PINCER GRASP, PEOPLE! 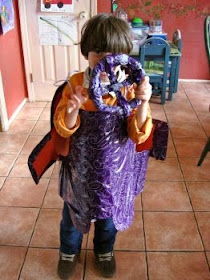 In 2009, when Max was obsessed with the color purple, I made him a car costume out of a purple shopping bag and it didn't much look like a car but hey, it was the thought that counted. 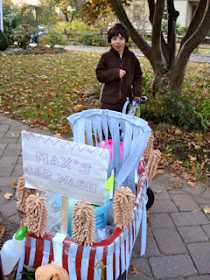 In 2010, Max was in his car wash phase, so I made a car wash for him out of a red wagon, strips of chamois cloth, brushes and a bubble blower. He was seriously into it. He even participated in our town's parade (at his request)—and won a medal for cutest costume. A major Halloween milestone. 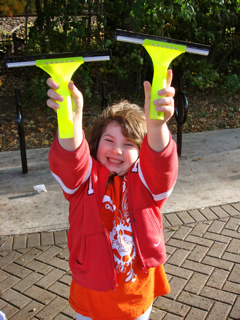 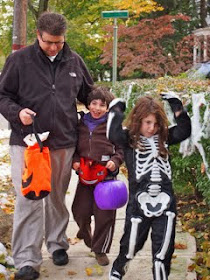 In 2011, Max again dressed up as Lightning McQueen, tried to swipe another kid's purple crayon costume and generally had fun. It was the first time he got into trick-or-treating. He tried so hard to articulate the words "trick or treat" and while it was hard to discern what he was saying, the attempt was awesome. That's generally true of kids with disabilities: If at first they don't succeed, at least they're trying.

Halloween 2012 was a wash, literally. We were holed up in a hotel because power was out in our neighborhood from Hurricane Sandy and trees were downed everywhere. 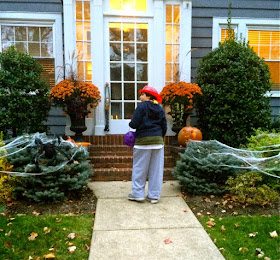 By Halloween 2014, Max had decided that he wanted to be a firefighter. So he put on his Fireman Max hat (the one he wore everywhere, except to bed), toted around a bucket and collected candy. He understood the game—get as much as you can—even if he didn't eat any of it. 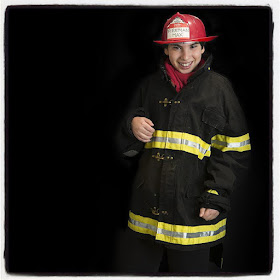 Halloween 2015 was special: We'd just welcomed Ben into the world. Max dressed up in the firefighter jacket our local fire department had given to him for his birthday. Sabrina went as The Joker. And Ben, delicious Ben, was a peapod. OMG. 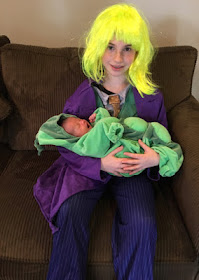 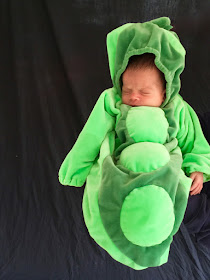 It was worth having a third child for this costume alone. 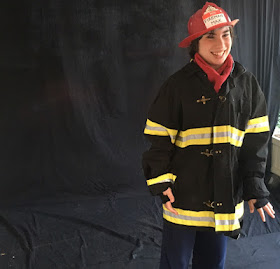 2016: Fireman Max, for the win! He really enjoyed telling neighbors that he was going to be a firefighter when he grew up. 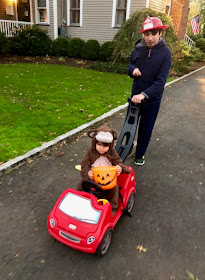 In 2017, Max owned his big brother status and pushed Monkey Ben around to trick-or-treat. 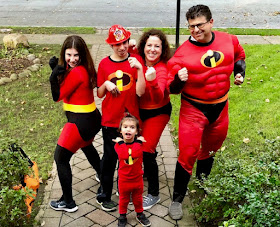 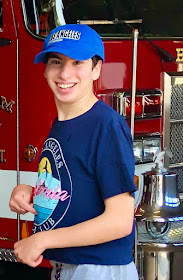 This boy has come so, so far.

He is my treat every single day.

Wishing you a Happy Halloween, however you celebrate.
Ellen Seidman at 9:15 AM