Cool idea: Raise money for a cause with your awesome Halloween display 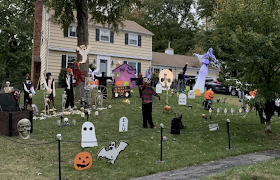 Every neighborhood has at least one awesome Halloween display that people flock to see. A teen in New Jersey who builds decorations year round for his extravagant lawn display is doing something especially genius on October 31: he's asking for donations to benefit programming for kids with disabilities.

Matt Berger, a high school sophomore in Livingston, New Jersey, started making and displaying Halloween decorations when he was seven years old. Over the years, he learned the how-tos for making wood cutouts and creepy figures by scouring YouTube videos and playing around with tools, reports Elise Phillips Margulis in Tap Into Livingston. The result is a creepy-good combo of ghouls, zombies, ghosts, fog machines, inflatables and more.

New additions to his home's lawn this year include a seven-foot wood skull, fences for a graveyard and a donation box. Matt decided to raise money for Friendship Circle, an organization that offers programs and activities for youth with disabilities. (Max has been going for years and loves it.) If you know that hordes of parents and kids are going to be stopping by your house, it's pretty spooktacular to get them to donate to a good cause while they're there.

Our Halloween display currently consists of pumpkins gnawed at by squirrels, dying mums and a somewhat rusted metal ghost. But we are doing a walkathon next weekend to benefit Friendship Circle, if you're up for making a donation—here.