When your child with disabilities regresses 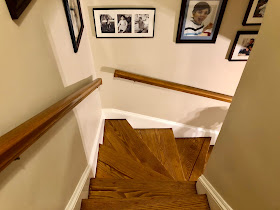 Educators talk about the summer slide—a decline in reading and other academic skills that can happen when kids aren't in school over the summer. Max has never had learning setbacks as a result of going to camp for the better part of the summer. This year, though, his ability to navigate stairs seems to have suffered.

At school, Max walks up stairs upright but at home he scampers to our second floor on his hands and knees, which is how he feels most stable. Since coming home from camp he's been getting stuck a lot; he'll get halfway up, then just not able to move forward. This started happening a few months ago, and I figured it might have something to do with getting taller—using his hands and knees is now more awkward.

But the other night, Max stood at the top of the stairs after his shower. And he stood there. And stood there. I could see him trying to move one foot down, but he was hesitant to take that first step. I was shocked. The boy who typically traipses downstairs to the living room when he's up in the morning before us all suddenly couldn't go downstairs on his own. I gave him a hand, and wondered if some of this may have to do with his muscles getting tighter. Max has four-quad spastic cerebral palsy, and as he grows his tendons are at risk of getting tighter. I also wondered if perhaps his muscle memory had regressed and he needed to relearn how to navigate stairs down and up, and get his confidence back.

Maybe it's all of those. I booked an appointment with the orthopedist for two weeks, until which time I will flex my worrywart muscles. I'll also be reaching out to his school physical therapist as soon as school starts, and maybe consider adding physical therapy back into his mix of home therapies.

Max's physical progress has been hard won. Nothing, and I mean that literally, has come easily to him, from the time when he was a tot and the Early Intervention physical therapist spent months showing him how to crawl so he could build up arm and leg strength. I can still vividly recall the glee I felt as I watched him walk up stairs for the first time when we were on vacation in Vermont. I've never taken Max's ability to move around for granted—just a few months ago, when I first noticed him get stuck on the stairs, I felt a flash of gratitude that he was able to do it all. And now, I feel pained that he can no longer handle stairs, and terrified that he will fall.

Max seems unperturbed about the stairs situation. This morning, I heard him wake up. He walked into my room. "Do you need some help going down the stairs?" I asked. "No, I'm OK," he said and left. And then, he came back. "I'll walk you down," I told him, and I did. As scared as I am, I felt major relief that he knew to ask for help.
Ellen Seidman at 9:03 AM