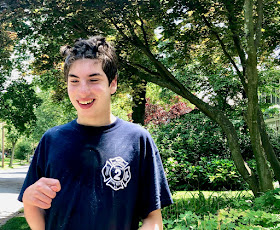 Last week, I read a great article by the mom of a child with cerebral palsy who had one of those "he'll be OK without me" moments. I totally related. Jamie Sumner's son, Charlie, is mostly nonverbal; he uses a speech device. He'd gotten a t-shirt with emojis on it and as she put the shirt on him and discussed going to the pool during camp, he pointed to the emoji with sunglasses on that said "awesome." Later, when she picked him up at camp, he again pointed to it and to a snoozing face. And that's when she realized that Charlie was telling her camp was awesome and that he was tired.

"As his mother, I fight for him to be understood and included at places like school and camp," she writes. "Moments like these, when he does it all on his own without my help and with such adeptness, are the ones that let me know he will be just fine, even when I am not by his side."

I've had these moments throughout the last several weeks, whenever I've seen photos or videos of Max at sleepaway camp. He's looked ecstatic, living his best life without me present. Few things make you happier in life then knowing your child is doing fine without you. It's how I've felt when Max has done everything from taking walks in our neighborhood to putting his dirty bowl in the sink for the first time. I got a big burst of he's-gonna-be-OK when he began communicating through his Apple Watch this year.

It's not that I don't think Max is capable of independence; I feel certain he will achieve that to the best of his abilities. He's got the determination, the will and the smarts. I just know that he will need someone to lend a hand with certain things, and it's hard to imagine that it won't be us who are there for him, as we always have been. Cutting the old apron strings is that much harder when you have a child who's grown up with many needs.

These he'll-be-OK moments and milestones don't add up to anything right now; who knows what, exactly, the future holds for my boy. Slowly but surely, though, he's showing us the way.
Ellen Seidman at 7:00 AM