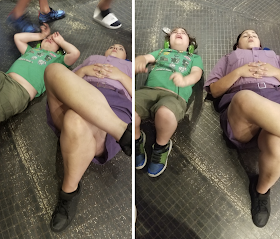 I sat on the steps by our laundry room, waiting for the wash to end as I scrolled through news alerts this weekend.  I came upon a story that had gone viral and as I read it, I cried. Happy tears and tears of, Why aren't more people like this?

Mom Lenore Koppelman posted about what happened on Facebook, at the end of May. She and her boy, Ralph—whom she describes as "awesomely autistic"—were at Universal Orlando Florida. Ralph had been beyond excited to ride the Spiderman ride at Islands of Adventure, continuously asking when the ride was coming up. The family sat in an ac'd spot until it was their turn. "The anticipation was driving him wild!" Lenore wrote. "But he did his very best to regulate it with the tools he has been given over the years by his teachers and therapy team at his special needs back home. They, and he, are all AMAZING."

Finally, it was their turn...except the ride broke down. And Ralph understandably lost it, collapsing onto the floor right by the exit and screaming, rocking and struggling to breathe. A ride attendant named Jen rushed over as Lenore tried to get Ralph to stand up. Jen told her to let him stay on the floor if that's where she needed to be. And then, Jen lay down next to Ralph. Lenore described what happened this way:

"She spoke to him so calmly, and while he screamed and sobbed, she gently kept encouraging him to let it all out. She told people to keep on walking around them, so they would stop standing there and staring. And then she told him it was okay for him to be sad and feel this way. She understood. She would feel the same way too. His feelings were validated. And she told him he could lay there with her as long as he needed to until he felt better. Eventually he DID feel better."

After about 10 minutes, when Ralph had calmed down, Jen asked him if he wanted water and if he wanted to sit up. Ralph gave her a high-five. Jen proceeded to let Ralph pick out a present in the gift shop, and he smiled at her. His mom couldn't stop hugging Jen.

When your child is having a meltdown—and I have weathered more than a few with Max—most people tend to stare or glare. The people who come over to you and your child or family to ask if they can help, or even nod in solidarity, are few and far between. Now, it's true that employees at Universal Orlando receive training for helping visitors with disabilities—but they are not taught to lie down on the ground to console a child having a meltdown. Jen told The Washington Post that Ralph reminded her of her 8-year-old nephew, who is also autistic, and that it had been "instinctual" to lay next to him so she could connect with him at his level but still give him his own space.

Accommodations are one thing. Being a sensitive, truly understanding human being is another. While I wish more people were this way, the truth is: nope. And so this woman deserves all the props and praise she's been receiving, and I hope she inspires empathy.

Jen at Universal Orlando Florida, you have my respect, my admiration and my heart.