A teacher gives an autistic student a Most Annoying Male Award. Really. 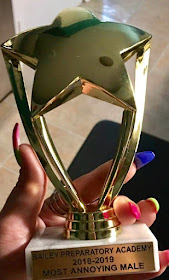 I went to a sports awards night last week at Sabrina's school. There was plenty of teasing all around. Students kidded a beloved coach about how much he yelled at them. Another coach took lighthearted digs at students. That's often what happens in these situations: you joke, in the spirit of "we're all in this together, and it's awesome."

But joking is most definitely not OK when it's at the expense of a student with autism who receives a trophy at a school awards ceremony for "Most Annoying Male." That's what happened at a school in Gary, Indiana, reports The Times of Northwest Indiana. Dad Rick Castejon told the newspaper that his 11-year-old son received that awful "honor" last month in front of his peers and the school's principal at a fifth-grade awards luncheon. When the family left the award on a table, the teacher reminded them to take it, acting as if the matter were a big joke.

What hasn't been reported is whether other students also received tongue-in-cheek awards. This is a relevant point—treating kids and teens with disabilities with equality means that people shouldn't be afraid to joke around them or even tease them in a goodhearted way. That said, this teacher absolutely crossed the line.

First of all, some people with autism can take things literally. It's very possible this young boy wouldn't have realized the so-called award was meant in jest, and may have taken the message to heart. Also, it is so, so wrong to make light of a situation that is a real issue for a child and family. The father described his son to The Times as a nonverbal boy who occasionally rocks back and forth and can easily get upset; during the school year, his teachers had regularly called the home to discuss how to best handle his behavior.

And what sort of message did being labeled "most annoying" send to this kid's peers? Well, I'd say it had the awful effect of validating that the child's behavior could be disruptive, contrary to the all-important message of acceptance and an understanding that people have different ways of expressing themselves.

The district has extended an apology to the family, and was said to be considering firing the special ed teacher. It seems like she might want to reconsider her career. This isn't just about being sensitive to students with disabilities—it's just common sense.

Photo from Rick Castejon
Ellen Seidman at 10:58 AM