How kids can talk with children who are nonverbal 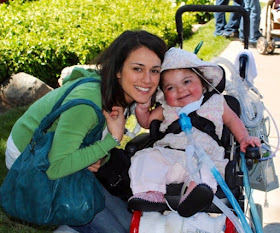 This guest post is by Victoria Nelson, author of Hiya Moriah. It’s an illustrated, rhyming book she wrote to honor her daughter, Moriah, who passed away five years ago from a rare medical syndrome called CHARGE. Hiya Moriah helps children better understand medical gear that may seem intimidating, as well as kids who may seem very different. With its amazing message of acceptance, it deserves to be on every child's bookshelf. “One primary reason I wrote this book was because we were often met with stares and questions of ‘What’s wrong with her?’ which made us feel like we never quite belonged,” says Victoria. “I believe knowledge is power, and by teaching children about medical equipment and challenges, it can help break down social barriers and uncertainty.” Here she shares five tips to help children interact with ones who are nonverbal. 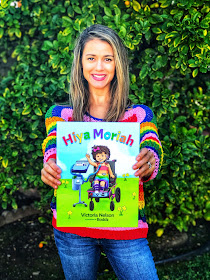 It has been over a month since Hiya Moriah was released, and I’m overwhelmed by the sweet response it has received. I’ve been brought to tears seeing pictures on Instagram and Facebook from people all over the world holding the book. It feels like a piece of my heart is with everyone who reads it, and that it’s making a difference. I’ll never forget how, during one of my first book readings, when I got to the part where Moriah explains her G-tube, a little boy jumped up, lifted his shirt and shouted excitedly, “I have one too! I have that too! Look! See?!?!”

Now that many have read the book, I want to further address what happens if someone goes up to say “hiya” to a child with disabilities, and he or she doesn’t respond. On many occasions, when kids would finally come over to meet Moriah, she’d get excited and “dance” in her wheelchair, making a few sounds. But when Moriah didn’t say “hi” back because she didn’t talk, I could tell they weren’t sure of what to do next...and they would usually walk away. I really appreciated the effort, and don’t fault them at all for not knowing. I’m here to encourage continued efforts and interaction with a child who is nonverbal and who communicates in ways other than words—maybe through sign language, hand/eye gestures or communication devices. Moriah often spoke with her laughter.

These are five key ways to interact with children who are nonverbal—I’m calling them the 5P’s.

Position to see
It’s always best to come in front of someone who is in a wheelchair and look at them straight on rather than from the side or behind so you are physically saying “I see you.” If you are able, bend down to be at eye level. While doing this, respect personal boundaries: Avoid leaning on a child’s wheelchair or touching their hands because some children could have compromised immune systems, which was our case with Moriah. If eye contact is not returned, please do not take it personally because some children cannot or do not want to make eye contact, yet they still want to be seen and known.

Posture kindness
I believe children and their parents can pick up on body language and energy, and can tell when you’re coming from a sincere place. Moriah could definitely sense it. She reciprocated smiles if you gave one to her. Smiling at a child can go a long way for a parent, too—it shows you’re there for their child in a supportive, non-threatening way.

Politely ask questions
If you’ve said “hiya” but do not get a verbal response from a child, I believe it’s okay to ask a child’s parent or caregiver questions. You can include the child by first saying, "I'm going to ask your mom/dad a question." It might be because I’m half English and I spent my childhood summers in England, but I’m completely taken with “May I.” It just sounds extra polite. For example: “May I ask his/her name?” or “May I ask what this is?” (regarding any medical equipment). It’s also OK to ask about other things such as: “How does _____ like to communicate?” and “What does _____ like to do for fun?” and “What is _____’s favorite game?”

I absolutely loved when people asked these thoughtful questions with Moriah. It showed that they were taking interest in order to interact with Moriah in a respectful way. Just keep in mind that someone who has a disability also has boundaries like any other person, and it doesn’t mean one has the right to know their whole life story upon meeting them—not unless it’s offered. There is a fine line between asking with a genuine interest to become informed and learning how to communicate with someone and asking offensive questions like “What’s wrong with her?” and “How long is she expected to live?” These are just insensitive, and most parents I know don’t want to explain what’s wrong with their kid or forecast their child dying.

Let’s try to change the way we ask our questions and instead of asking “What’s wrong?” say what’s right, such as “I like your smile” or “Wow! Your watch is awesome.” Let’s first affirm the positives, and eventually, it can lead to questions of  “What are these cool, different things that you have?” in order to better connect and become informed. 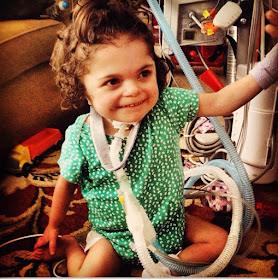 Patience is key
Communicating with someone who is nonverbal can’t be rushed. Taking a bit of time to wait, pay attention and listen in a new way can help you get to know the person, and understand what they might be trying to tell you. There were many afternoons of reading books to Moriah, and I never really knew if she was enjoying them. But one day, Moriah became focused on a particular story in her Children’s Bible, and every time I’d try to turn the page, she’d turn back to “Jesus Heals a Blind Man.” From that day on, she would grab the book, stick it in my face and have me read the story over and over again. She was showing me what she liked. It was in these little moments with Moriah where I got to learn about my sweet girl, and what she liked and what her personality was—without ever using words. I learned to wait on her to let me know what she wanted to communicate, and it forced me to slow down and pay attention like never before.

Presence and persistence, not perfection
One of the best things I ever read to help me when making new friends was in Missing Stars, Fallen Sparrows written by my dear friend, Nick Palermo, founder, creator and the heart of Young Life Capernaum, a ministry for high schoolers with disabilities. In his book, Nick mentions “being comfortable with being uncomfortable.” My mind was blown after reading this phrase, and I’ve held onto it ever since. It's given me permission to get over my fear of being awkward anytime I was meeting someone who was different than me. This gave me the freedom to just try, even though there might be uncomfortable pauses and fumbling of words. My goal is to be intentional, present and persistent. The reward has been much greater when I faced my fear of being uncomfortable and awkward; the beauty and friendships that have surfaced from persistency has been invaluable.

In the end, because each of our children is so different and unique, there is no one formula for how to interact. I believe the key is to be intentional and mindful of creating spaces for all children with different abilities, especially those who communicate differently. I encourage you to forge your own experiences by reaching out to include others. Together we can start reconciling the social stigmas and barriers that exist in society about people with disabilities with creating awareness—and friendships, too. 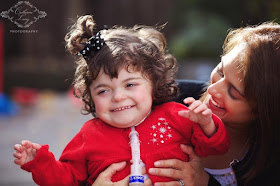 You can connect with Victoria at Moments With Moriah on Facebook and @victorianelson on Instagram.
Ellen Seidman at 9:28 AM