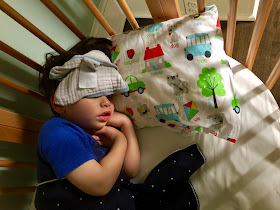 Several years ago, when we realized Ben had a suspicious lump on his neck, it became clear just how neurotic I could be as a parent. Given the trauma Max went through at birth, it was amazing that I generally wasn't all that freaked out about health stuff throughout Max and Sabrina's childhoods. I stayed calm. I didn't fear the worst, other than the devil that is seizures. Perhaps it was because we'd been through a certain hell when Max was born, and everything that followed paled in comparison, although I can totally understand why some parents would have the opposite reaction.

The years went by and we had another little guy. And now it's become very clear that nothing is holding me me back from letting my freakout flag fly.

Ben got a fever on Friday. On Saturday it was 103. The pediatrician said it was a virus; he tested negative for strep. He seemed to get better. Then on Monday he got sent home from school because he wanted to nap. He mentioned that his head hurt. Then he mentioned his neck hurt. Then he said his teeth hurt, pointing to the back of his mouth. Then he was burning up again and lying on the couch, whimpering so sadly. The most alarming sign of all: He didn't even want a lollipop, his favorite food group.

I should know better to consult Dr. Google but: #neuroticparent. As soon as I did, I booked another appointment with the pediatrician, this time with one of the most experienced doctors in the practice. I told her all his symptoms. She examined him then rationally pointed out that when little kids say their neck or teeth are hurting, they often mean their throat. It wasn't red but it could have been bothering him.

"When can I get stickers?" Ben asked.

"Can I ask you a neurotic question?" I said, and the student P.A. trailing the doctor smirked. "There's no chance it's meningitis, right?"

The doctor looked at me kindly and said "If he had that, trust me, he wouldn't look so good and he certainly wouldn't be asking for stickers." In her decades and decades of experience, she'd only twice ever encountered meningitis.

I calmed down. But in the days that followed, Ben's fever stuck around. At one point when I asked what was wrong he explained, "There is a doodie in my teeth that has to go down to my feet," and no amount of googling was going to explain that. Dave was on a business trip so there was nobody around to calm me down. I hit my Facebook mom's group. Some noted their kids had the same virus. But: Could it be coxsackie? Could it be mono? I texted my two best friends, who wondered if he had the flu. Dr. Google said: Eeeeeep weird bacterial infection! Yikes what if it's some rare problem? OMG COULD IT BE THAT?! Technology is your BFF and your best fear enabler, too.

Then my mom gut took over. Ben wasn't totally his usual self, but he was feisty and smiley. That gut has served me well. Like the time Max was on antibiotics for strep throat yet still didn't seem to be quite right. We went back to the doctor. She said it was a viral infection on top of the strep. A couple more days went by and I knew something was wrong. We returned to see a different doctor and sure enough, he still had strep. Another form of antibiotics cured him.

As of today, the fever's gone and Ben's in good spirits. Me, I'm seriously relieved and drained. Parenting: not for the weak.
Ellen Seidman at 9:39 AM