The joy of spying on your child 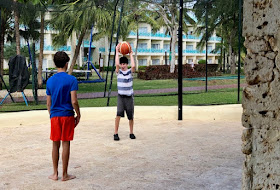 Last week, we went to a resort in the Dominican Republic, the Hilton La Romana. It was fun, relaxing and the perfect opportunity to spy on Max as he asserted his independence. I wanted to make sure he could handle himself without him noticing me checking up on him.

My spying started on our first morning there, when Max decided he was going to carry his breakfast plate back from the omelet station. He'd done that when we were on vacation last year, but it still made me a little nervous—it is not the easiest thing for him to clutch plates. And yet, after I told the chef Max wanted a veggie omelet and watched from nearby, he held the plate firmly and walked confidently back to the table.

The next morning was even more thrilling, because Max decided he was going to order his omelet himself. Again, I hovered nearby. Max pointed to what he wanted—tomatoes, corn, peppers, cheese, no onion—to make his wants known to the friendly guy at the station. Max did this the entire vacation. Once, I noticed a couple watching Max as he pointed to what he wanted. They nodded in admiration, and I felt a surge of pride. I appreciate it when other people see his abilities. 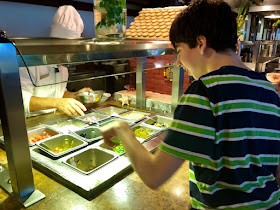 For the record, I don't have a habit of spying—well, other than when I've showed up at Max's school for meetings and have sneaked peeks of him in his classroom. I do this with all my children; it's fascinating to see how they behave when they're not around you. You're all, WOW! WHO ARE THESE HUMANS I CREATED?! It's been my experience that Max tends to be more independent when he's at school and at camp. When he was around six, I walked into his classroom one day during lunchtime and was astounded to find him feeding himself—he wasn't doing that at home.

Max often breaks out of his comfort zone when we are on vacation, trying new things and flexing his independence. Now that he's getting older, it's especially important to me to see how he does on his own. I want him to do things by himself. But: I worry about him doing things by himself. Recently, we went to drop off holiday cookies at a neighbor's house. Max insisted that I stay in the car so he could walk up the stairs and hand the bag over. He made it up two of the large concrete steps then stopped. "I"m stuck!" he yelled, and I zoomed over before he could fall; one foot was caught on the lip of a step. Still: step by step, bit by bit, I know the independence will come, and I'll have to chill or develop a Xanax habit.

As in recent getaways, Max wanted to hang at the teen club alone. He played pool and foosball with the staffers there or watched TV or videos on his iPad. On occasion, he'd take a walk with one of his favorites, Nikki, to grab a piña colada (con chocolate). A few days in, he started greeting people with "Hola!"

One evening, after dinner, Max informed us that he wanted to head back to the teen club. "Are you sure you can get there yourself?" Dave asked. Max had been walking there alone from our room, but the restaurant was further away and it was dark outside, although the grounds were well lit. "Yeah!" said Max. As I watched him stroll off I was seriously tempted to follow behind, but I held back—it didn't feel right to cross into stalker territory. Dave and I did a walk-by a bit later, and Max was just fine.

The best spy moment of all happened when I headed over to the teen club to grab Max for dinner on another night and spotted him playing basketball with a boy. I watched from behind a wall, in awe. Max did his best to toss the ball toward the net. He didn't have the flexibility and arm force to get it up high, but that didn't matter. The other boy simply grabbed the ball and tossed it back to him. Sometimes, Max caught it. Mostly, he passed it.

My heart did flip-flips as I watched. It was one of the only times I could ever recall Max playing independently with another kid—as in, not through a planned activity or program. Just two boys, enjoying themselves on vacation.

I left them playing and took a walk. Dinner could wait.
Ellen Seidman at 6:40 AM