Microsoft's Superbowl ad 2019: When kids of all abilities play together, everybody wins 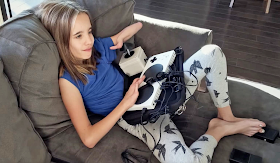 Microsoft is back with yet another great commercial about inclusive play. Their December ad for the Xbox Adaptive Controller featured a boy with Escobar syndrome, Owen Simmons, whose friends race over to his house to join him in a game milestones. Owen's back in Microsoft's Superbowl Ad 2019, We All Win, along with a bunch of kids of all abilities and a couple of parents. They include the awesome Jordan Reeves and her mom Jen of Born Just Right.

Here's the extended version of the Microsoft Superbowl Ad 2019 (a 60-second version will air during the Superbowl). And here's hoping a bazillion people get the message that our children, just like any other children, have the inalienable right to freedom of play—and to be included.