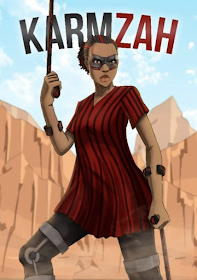 Farida Bedwei, an IT entrepreneur with cerebral palsy who lives in Ghana, had no heroes with disabilities to look up to back when she was a comic-loving kid. So she created Karmzah, a comic about a superhero with CP. By day, Morowa Adjei is an archaeologist—but her walking aids transform her into Karmzah, who has the power to fight the bad guys, flip 'em over and run and fly, too.

Karmzah launched last October, on World Cerebral Palsy Day. I missed the debut but my web pal Lauren shared about it yesterday. Besides inspiring and encouraging children with with CP, Farida also hopes to make the condition seem normal. Which, of course, it is—there is a wide range of abilities in this world, and CP is part of that spectrum.

Karmzah joins a select group of superheroes with disabilities that include Professor X of the X-men, who uses a wheelchair; Hawkeye of The Avengers, who is deaf; and Daredevil, who is blind. Karmzah can be seen on the Afrocomix App on Google Play. I haven't been able to watch because I'm not on Android, so if you can see it, tell us about it! Listen to Farida explain:


Image of Karmzah: Farida Bedwei
Ellen Seidman at 11:34 AM