I'm so glad you ratted Daddy out 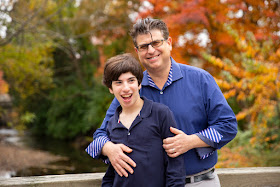 Max got off his school bus the other day, walked up to the porch where I was waiting and said, "Police!"

"You and Daddy heard a police car today?" I asked. Dave had driven Max to an appointment early that morning to get new foot braces.

"No! Daddy! Police!" Max said, and he made a motion with his hands that means "fast."

"Did the police stop Daddy today?" I asked.

Funny, but Dave hadn't mentioned it to me.

"Did Daddy get a ticket?" I asked.

He was quite pleased with himself for letting me know. And I was really happy to hear it, too. Well, not that Dave had gotten in trouble with the law for speeding but that Max had told me.

Tattletaling may not be an official developmental milestone but it is in my book, yet another step forward in Max's communication skills. He had a story to share about Dave, and he did. Perhaps he expressed it in a basic way but that could evolve to more complex storytelling. His conversation skills continue to mature—there is real back-and-forthing now, which didn't used to exist. I ask questions and he answers them. He asks me questions and I answer.

Max's speech is progressing, too. Some words are getting clearer, and while there are still plenty of times when I ask him to use his speech app or type out what he is saying on my phone, there is more that I understand. This is in direct contrast to the speech therapist who told me, several years ago, that she didn't see Max's speech changing and that she didn't think it would. I told her she was flat-out wrong. As much as I do like being right, well, I AM RIGHT.

I don't really have end goals in mind because what would be the point of that? Max will talk and communicate to the best of his abilities. Mostly, I'd love for his enunciation to keep improving, because he so wants to use his voice and be heard. Don't we all?

Later in the day, Dave and I went out to grab coffee. "So, what happened with the police?" I asked. Turns out Dave had been caught speeding right before he and Max got to school, but the cop let him off.