Heard the one about the comedian who won't stop ridiculing people with Down syndrome? 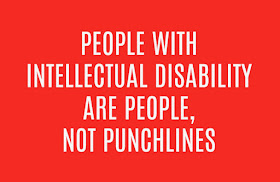 Heard the one about the comedian who makes fun of people with Down syndrome? Not funny, right? But Tom Segura thinks it is. And he's been refusing to remove the offensive, hurtful bit from his Netflix comedy special, Disgraceful. This despite the fact that people with Down syndrome, their families and other advocates have pressed him to do it for seven months straight now.

Disgraceful aired in January. There was this bit:

Followed by this scenario, in which he pretends to react to a friend's bad idea without being able to use the r-word:

Now you can't say that, you've gotta be like, "That's not smart. Your idea has an extra 21st chromosome, if you ask me."

His point: Ijust doesn't have the same impact without the r-word.

Immediately, there was an outcry. Special Olympics, Best Buddies and a group of advocates appealed to Segura and Netflix. A Take It Down, Netflix change.org petition went up. After numerous email exchanges, there was a meeting in June with Segura; attendees included Special Olympic athletes and Global Messengers Dustin Plunkett and Rachel Osterbach, along with Nancy Gianni of Gigi's Playhouse and her daughter Isabell. Word is that Segura referenced removing the material, but later declined, as did Netflix. This weekend, an Op-Ed ran in the L.A. Times by a writer with two brothers who've participated in the Special Olympics denouncing him and Netflix, too.

When I've spoken out about the r-word over the years, some people have responded that other disparaging words will crop up to take their place. That's for sure. Now we have this so-called comedian who's actually made that part of his routine, and Netflix sees nothing wrong with it.

In his riff, Segura noted that the r-word typically isn't used these days to describe a person with Down syndrome—it typically describes a stupid idea or situation. He implied that caring about the usage of the word is ridiculous.

Believing that this is the best comedic material you can come up with, and clinging to it. Because that's what you put into a routine, right? Your best material. This is the best this guy has.

Not understanding why the word is painful, even if it's not used to describe someone who has Down syndrome or intellectual disability. Using that word as a synonym for stupid or loser or annoying or whatever negative thing only reinforces old stereotypes, making life that much harder for people with intellectual disability like my son.

While there are plenty of advocates with intellectual disability who can and do speak up for themselves, not all can—let alone children. Demeaning and debasing people who are defenseless, and roping others into laughing at them, is about as low as you can go.

Blatantly ignoring the efforts of people who are often mistreated to gain respect for themselves. I just don't get how it's possible sit in a room with self-advocates who have Down syndrome—the very people you've degraded; hear their reasoning; then turn them down.

We've been down this road before. A couple of years ago, another comedian had a special—this one on Showtime—in which he demeaned a supposed cousin of his with Down syndrome. After considerable protest, Showtime removed the program from its lineup. The comedian took the material out of his skit.

Really, there's only one inarguable point here: People with Down syndrome and intellectual disability are not laughable human beings. My son is not a laughable human being. Make fun of human foibles all you want, as comedians often do—but quit seeing disabilities as defects. We certainly don't see it that way. My son is all-around awesome. Also: He's got way higher emotional intelligence than Tom Segura.

You can sign the petition asking Netflix to remove the material from the show here.
Ellen Seidman at 10:16 AM