He saw a movie by himself and other unexpected milestones 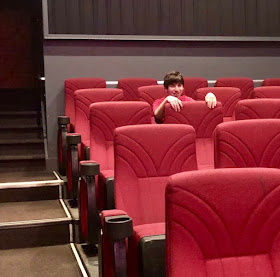 "I want to see Incredibles 2!" Max announced. We were upstate NY two days before Sabrina's camp Visiting Day. We'd decided to make a weekend of it, so I'd booked us into an Airbnb cottage and we had time to chill. As we walked around a cute town Friday evening, Max spotted the movie theater.

Now, Max wanting to see Incredibles 2 was not unexpected. So far, he's seen it four times and it seemed inevitable he'd want to go again. What was unexpected was what he said next:

He wanted to go to the movie by himself.

I guess I wasn't totally surprised, because Max has been pushing for more independence. (See: "I want to take an Uber.") I also suspected it was a measure of self-preservation—Dave and I have each seen it with him, and Max probably figured he couldn't get us to see it again.

WeI talked about it. There was a matinee on Saturday at 12:15. We were in a small town. We could get Max seated in the theater, have lunch nearby and check on him. "Yes," we said.

The next day, after an early breakfast, we checked out a Farmer's Market and a few stores. At around 9:30, Max started asking to go to the movie theater. We held him off till 11:15, at which point we got him a ticket and got him settled in the empty movie theater, toward the back.

I left, feeling a little nervous. We hung with Ben at a nearby playground for a bit. I kept picturing Max in that theater, alone. Thoughts of pervs flashed through my head. Should we have left him there? I went back into the theater as the movie started. A bunch of people were there. Max startled when I whispered "Hi! You OK?"

"Yes!" he nodded, not even looking at me.

I kissed him and walked out. We went to lunch. Then Dave went in and walked out a bit later with Max, who had the hugest grin on his face.

"Did you enjoy seeing it again?" I asked.

Later, Dave and I were talking about it.

"Did you ever imagine Max would see a movie by himself?" he asked.

"No, I never imagined it," I said. "There was a time when I couldn't have even imagined he'd even see a movie!"

It's true. I don't have expectations for Max doing stuff he currently doesn't do. Not because I don't think he's capable, but because I know he's on his own timeline and he'll do stuff when he's ready...or not. Heck, I can't even remember when I first saw a movie in a theater by myself, or what it was. I'd guess in my twenties. Definitely not at fifteen.

When Max was younger, movie theaters scared him. We were able to take him to see drive-in movies first. But when Monsters University came to the theater in our town, Max said he'd try to see it. And he did. And, whoa, that was five years ago this weekend—so I guess major movie events in Max's life happen every five years. Who knows, maybe in five years he'll be starring in some summer blockbuster.

Two thumbs up to my big guy.