The mayor of the doctor's office 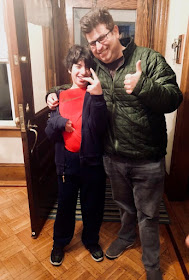 Max headed to the pediatrician's last night for his annual checkup. He's perfectly fine with going there. I, of course, remember the meltdowns he used to have in the waiting room when he was younger. I'm thrilled that visits are now a non-event, but I'm haunted by the screeches of ghosts past.

Dave took him, and came home with a glowing report from the doctor about how much Max has grown, along with the observation that Max was the mayor of the doctor's office. I'd seen it the other week, when I brought him in for a quick check on something. First, Max stood at the reception desk and chatted with the receptionist.

When the nurse took us back to an exam room, Max wandered out as we waited for the doctor and headed to the nurses station. He leaned over the giant desk, rested on his arms, grinned at the ladies and just hung out there, like he was some suave dude who'd sauntered up to a bar and was trying to hit on babes. Who knows? He is fifteen. Hmmm, that might be a first: a pediatric patient trying to pick up the nurses.

Another possible first at the pediatrician's: the patient who only wanted to talk about his trip to Las Vegas.

"I've never been there," said one nurse.

"Are you going to gamble?" another asked.

Then Max wanted to make sure he wasn't getting any shots. Nope!

I love watching this side of Max. He's generally pretty social but when he feels comfortable somewhere, his confidence soars. He used to behave the same way at his old school; after he got off the bus in the morning, he'd saunter around, say hello to everyone and give them high-fives.

By this point, the doctor was waiting for Max in the room. He told her all about Las Vegas as well. (He'll be writing about it here, soon.)

As Max walked out of the office, he bumped into a nurse who's known him since he was a kid and he gave her a hug.

"Fireman Max!" he informed her.