Why it's good to talk about our children's differences 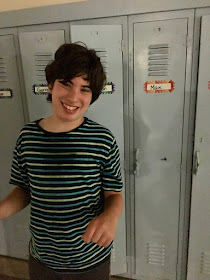 For many years, I've tried to help people see how in many ways Max is like others his age—he likes to have a good time, laugh, make friends, down copious amounts of chocolate ice-cream, yada yada. Last week, I realized that not acknowledging how Max is different has been doing him wrong.

This epiphany is brought to you courtesy of Thomas Ellenson, writer and performer of the one-man biographical show It Is What It Is, which I saw last Thursday night. Like Max, Thomas has cerebral palsy and uses an iPad for communication. He also uses a power wheelchair. In the show, he emphasized that he didn't want people to only see his wheelchair when they looked at him. "I'm just like you!" he noted, several times. But then, he recanted and said something even more profound: Actually, he said, he is very different than us—but "different is good."
Sitting in the darkness of the theater, I saw the light. En route home and for days after, I kept thinking about what Thomas had said.

When we mainly focus on the ways our children with disabilities are like other people—in the name of helping them and spreading the good word—we deny their obvious differences and unintentionally make "different" a negative.

The spectrum of people's behavior, physical makeup, abilities, talents and basically everything that makes us who we are is as expansive as the world itself. Max does things differently than those squarely in the center of that spectrum, the ways he moves and talks and processes information and learns. But then, who doesn't have variations on what's mainstream, visible or not? Our differences are an essential part of who we are, each and every one of us. "It is our differences that unite us," Thomas noted.

In our drive to get people to embrace our children, in our urgency to encourage parents to teach their children to befriend and include ours, it would serve our children best to talk about all of who they are. Discuss their similarities to other children, but acknowledge what's different, too.

Sometimes, younger children ask me if Max can talk. I've always just said, "Yes, he talks in his own way." That's true. But I could also say, "Yes, he talks in his own way. Because his words aren't always easy to understand, he uses an iPad to help him say what he wants to say." That's true, too—Max's speech often isn't intelligible to those who don't know him, and to ignore that is to ignore a major difference. I wouldn't be doing Max a disservice by pointing out the obvious. Some children and adults are wary of different; in speaking about it, I can help soften the stigma and open dialogues...and perhaps minds, too.

Really, there are no rules. You say what seems right in the situation. You hope your child will someday be able to speak up for himself. But spreading the word about differences makes all the sense to me.
Ellen Seidman at 6:45 AM