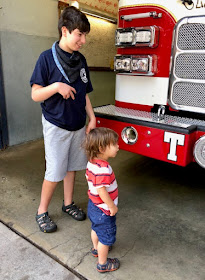 I didn't have a whole lot of worries about having a third child, other than the overarching "How exactly are we going to juggle another human being?" (After surviving the first six months, we've been fine.) Also: "Will we remember anything from the last time we had a little kid?" (Kinda-sorta, that's why BabyCenter exists). There was, however, one thing I kept wondering about: How would Max react if Ben also got into fire trucks and firefighters?

I had good reason to consider this. Throughout my pregnancy, Fireman Max repeatedly informed me that Ben was going to be a police officer. Read: I am the only person in this household who will be a firefighter. Max takes great pride in his aspirations. I hadn't counted on much sibling rivalry, owing to the giant age gap between Max, Sabrina and their little brother, but I figured if our little guy got into fire trucks, all bets were off.

Then came Ben. My friend Peg got him an adorable fire truck bank. Max groaned a bit but didn't seem all that perturbed. I was astounded. Months later, someone gave us a cute pair of Baby Gap fire truck pj's. "Hey!" said Max, but he said it with a smile. Ben eventually did start liking wheeled toys—particularly busses, but he also occasionally plays with Max's fire trucks. Max has been cool with it.

Max may be a teen who insists that people refer to him as Fireman Max, but all this a real sign of maturity. He is being a great big brother, no matter that Ben likes to torture him by swatting him away when he asks for a kiss.

Sunday afternoon, we were wandering around a neighboring town when Max spied a fire station. He and Dave dashed over as I kept walking with Ben, who needs to stop and examine all objects in his path—potted plants, doorways, steps, dogs, garbage lying on the street.

We arrived as Max was ringing the doorbell and soon enough, a couple of firefighters opened the door to the station and welcomed Max and Ben to check out the trucks.

"Look, Ben!" Max said as he gazed down lovingly. He pointed out the horn. He giggled when the firefighter turned on the truck's lights and Ben said "Light! Light!"

Ben was in awe. Max was gleeful. Me, I just melted.

In other news, Max has scored an appearance in the renowned Tarrytown, New York, Halloween Parade, home of Sleepy Hallow. He will be riding in the fire truck. Oh, yes, he will. Grandpa Michael, who lives nearby, strolled into the fire station and asked, and it is happening.

Next Saturday evening, the rest of our family will stand in the crowd as Max has his big moment; for two years now, he's fantasized about riding in a parade in a fire truck. He'll be decked out in his official firefighter uniform, a gift from our local guys three years ago. I can't even imagine how excited he'll be. And I can't even imagine the look on Ben's face when he sees his big brother ride by.