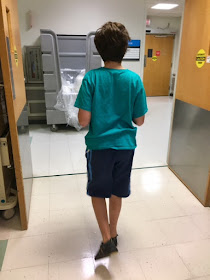 Yesterday, Max had his double surgery. Last week, I got him a new lunch pack for high school. Both seemingly unrelated, yet both involved various degrees of worrying about Max. In the end, in the immortal words of FDR, the only thing I had to fear was fear itself...except for two things.

Years ago, I used to worry that Max would someday require foot surgery to remedy tightness. It sounded painful and awful. But when we visited an orthopedist this past spring and he noticed that Max's right foot was tight and turning inward and suggested a procedure, SPML, I was sanguine. I knew his foot needed help, and this doctor was THE doctor to do it. I was no longer that overly anxious mom so freaked about her baby's future.

That's not to say I didn't freak at the hospital. Dave was coming over after our sitter arrived. As Max and I sat in the pre-surgery room at 6:15 a.m. and a nurse asked questions, I welled up. Max didn't notice; I'd put on videos of a Sailing Away party on a Disney Cruise, and he was mesmerized. I got ahold of myself, because the last thing Max needed was to see me upset.

Max, meanwhile, had been telling everyone about his trip to Vegas and reminding them to call him Fireman Max. Then the orthopedist came in and made a pen mark on Max's leg where he was going to operate, and Max got nervous. I found a new video for him to watch. He didn't want to put on a hospital gown, which was fine. I did. We headed over to the operating room.

The second Max walked in, he announced, "I'm not sick!" and got teary.

I reassured him that everyone knew he wasn't sick. I reminded him that after the surgery, he would walk better and that he'd have less drool. We lifted him onto the gurney. The anesthesiologist showed him the anesthesia mask and said it was just like the kind firefighters use. Max kept shaking his head no and wouldn't put it on. I put the back of it against my mouth to show that it was OK. The doctor asked if Max wanted to hold it, and he grudgingly did. He took a whiff. "It smells good!" he said. A minute later, he was under. I left the room and started crying.

It is awful to see your child unconscious. It is extra hard when your child's been in the NICU. Hospitals always take me back to that terrifying time in my life. I sat in the waiting room, a teary mess. I checked Facebook. Dave showed up. I did some work. I stared into space and worried.

The first operation, for the drool reduction, was only supposed to take an hour. When that passed, I asked the front desk to find out how things were going. "The doctor's still operating!" I was told, aka no news is no news.

An hour later the doctor, an ENT, walked into the waiting room. The surgery hadn't gone as smoothly as he thought it would. On the upside, one of the nerves that supplies the main salivary gland was easily accessible, not always the case. But: there was another nerve the doctor had to operate on and the right side of it was nowhere to be found. Seriously. It was possible that it had melded to the bone. The doctor had fiddled around. He wasn't sure he had gotten it, which could affect the outcome of the drool reduction. Also: there was a small puncture in Max's eardrum, which he had stitched up. (The doctor got to the nerves through Max's ears.) None of this would cause Max any additional discomfort. Overall, he was optimistic.

I was disturbed. Nobody likes to hear their child's surgery wasn't perfect. Plus, if Max was going through this, of course I wanted the results to be ideal. We'll be bringing Max in for a follow-up next week.

The other surgery went as well as it could, although we were surprised to learn that Max's foot was in a cast. I know other parents whose children had gotten the same procedure and they had been casted, but when I'd checked and double-checked with the surgery coordinator I was told no cast.

A few minutes later, a staffer called us in to the recovery area. Max was awake and groggy, his eyes half open. He was also weepy, because he wanted to leave. We hung out while they checked his vitals. I asked for a red magic marker and wrote those magical words on his cast: "Fireman Max." He also wanted me to write "I am going to Las Vegas for my birthday." It took me back to six years ago when he'd gotten serial casting to straighten his foot, and I had to write "Max eats spaghetti sauce" (his obsession at the time). 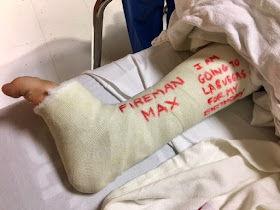 "It's not good!" Max said, pointing to his cast, and I pulled up old photos to remind him that he'd had casts on his feet before. Dave pointed out that roaming around Vegas would be easier, because the cast would help straighten his foot. That helped.

Max was out of it for a few hours, then rebounded to his usual cheerful, chatty, pasta-loving self. He checked out the card Sabrina and Ben made for him. He downed a big bowl of baked ziti and gulped milk. He watched movies. He talked about what he'd do in Vegas. "I'm not sick!" he kept reminding me.

Dave and I had to scramble to find a surgical shoe that fit over the cast—they'd only had a clunky boot at the hospital, which I thought would cramp Max's style. (Well, OK, I thought it would be awkward to walk around in.) We checked with a medical pharmacy, no luck. Sabrina saved the day by figuring out we should stop by a podiatrist.

Max's foot will be achy and tender for several days, but he's on Advil and we have prescriptions for codeine and Valium in case of muscle spasms. Basically, he was fine and didn't complain of any discomfort. I was tempted to get the Valium for myself.

As for the smaller concern that never came to pass, the other week I ordered Max a fire truck lunch pack from Pottery Barn Kids. I wanted to personalize it with "Fireman Max" (what else?) but they had a nine-space limit for names and "FireMax" wouldn't have cut it—he only likes to be known as Fireman Max. So I went with his initials, FMS, then worried that he wouldn't like it. I so wanted to give him something meaningful for the start of high school.

The lunch pack arrived. I did not want to surprise him with it on the first day of school and risk a meltdown. "Max, I have a surprise—do you want to see it?" I asked. He did. I whipped out the lunch pack. He liked the fire truck pattern. Feeling nervous, I pointed out the initials.

"No—Fireman Max!" he reminded me.

"I told them that, but Fireman Max wouldn't fit—only your initials did," I said.

And amazingly, that was that. He was content with initials. Another time when my worries added up to nothing. Meanwhile, my amorphous concerns about the drool reduction surgery had become a partial reality, but of course, of course, of course: the worrying accomplished nothing.

Someday, some genius will come out with a "No Worries!" app and I'll be able to swipe my phone across my forehead and clear my brain. (Or who knows, maybe they'll be able to code apps directly into our brains.) I fret and ruminate a lot less than I used to when Max was younger, but still can't stop it. Such are the perils of parenting.

Max slept on the couch in our living room last night. He couldn't bear weight on his foot, and he was too heavy to haul up the stairs. I hung out for a while to make sure he was OK.

Suddenly, he picked his head up.

"No drool," I reassured him.

A few minutes later, his head popped up again.

"It's 8:45!" he said, excitedly. That's the time his plane takes off for Las Vegas in December.

And then my sweet boy drifted off and I sat there, in the dark, listening to the reassuring sound of his breathing and feeling glad the day was done. 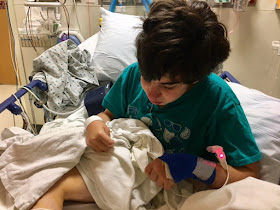