The dad who turned kids with diseases and disabilities into superheroes 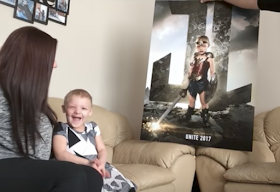 Every child needs to feel empowered, but kids who have cancer and disabilities can sometimes use an extra dose of you-can-do-it. Enter commercial photographer Josh Rossi, 32, a father of two in Salt Lake City. He was used to making photo subjects look cool for his job. For Halloween last year, he dressed up his three-year-old as Wonder Woman, in the spirit of showing her that girls could do anything, and had her recreate scenes from the movie. The photos went viral, and he heard from parents of sick kids, asking if he could do something similar for their children. And so, he did.


Josh invited six kids all under 8 years old, including ones with cancer and disabilities, to pose as Batman, Aquaman, Wonder Woman, Superman, Cyborg and Flash. Costume designer Julie Whitley worked her magic, and Rossi did a photo shoot one day last month. He recently posted the results on his website, dubbing the group The Justice League.

Josh wanted to portray the kids' challenges as strengths. For instance, kryptonite weakens Superman's heart; Tegan Pettit, the kid dressed up as Superman, has half a heart and is waiting for a heart transplant. Zaiden Solrow, a boy with ADHD, is prone to running, and so Josh morphed him into Flash. Kayden Kinckle, a double amputee, became a cyborg.

Now, I wouldn't call my child's disability a "weakness," a purely negative connotation. Max's cerebral palsy poses challenges for him, to be sure, but it is also an integral part of who he is. His CP is no more of a weakness than, say, a guy's bald head is. Again: Just part of the package. That said, it's great to see these kids' delight at being transformed into superheroes, ready to take on the world—and leap over naysayers in a single bound.