It's a good thing when your child's not thrilled to see you, right? 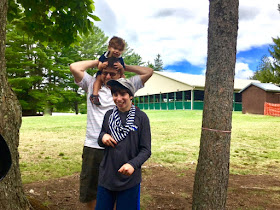 Dave, Ben and I picked up Max from camp yesterday. The three of us had a nice few days at a resort in Pennsylvania, but by the time we were en route to get Max I couldn't wait to see him. That last five minutes on the gravel road to his camp took forever.

"I hope you guys have a ton of tissues...." his program director had messaged me that morning. I'd already figured Max would be weepy, as he loves camp. We pulled up, the gate opened and we cruised to his bunk. He was waiting outside, with a bunch of counselors, looking remarkably calm. I grabbed Ben out of his car seat and started walking over.

He glanced at me and Dave, then turned to talk to a counselor.

I didn't have a parent existential crisis or anything but still: Not even a "Hello!" Last year when we picked him up, he ran to me and gave me a big hug. I decided it was a good thing that Max wasn't enthusiastic about seeing us, a sign of a great summer and independence. Or at least that's what I told myself.

I gave him a big kiss. He wanted to know if he was coming back next year. I said yes. He lit up when I showed him the confirmation for plane tickets to Las Vegas, his upcoming joy trip with Dave. He got upset when informed it was for four days, not his fantasy of ten, but cheered up by the time we left.

On the way home, we stopped at a cafe for French onion soup, a Max fave. We hit a Starbucks and he got some mood-enhancing whipped cream (yes, straight up). We chatted about what he'd done at camp, the friends he'd made, what he'd be doing in the upcoming weeks and starting school in September. I'd heard through the grapevine he didn't do his school worksheets because he was too busy socializing with a bunk of girls his age. He said that was true. I thought, awesome.

Max giggled as he listened to Ben's new words: School bus! Big truck! Pool! Knee! Choo choo! Cookie! Mommydaddymommydaddy! New! More new! He squeaked a dinosaur when Ben got fussy and handed him the toys he dropped. He was duly impressed when I asked Ben to make a fire truck sound. He cracked up when Dave told him that next year, he'd be attending Peanut Butter Camp. (Max is highly allergic to the stuff). As is customary on trips, Max informed us we were going the wrong way as he thinks he knows better than the navigator. Sometimes, he does.

Dave took Max out for sushi when we got home. I said goodbye from the back porch and Max said, "Mommy!" and threw open his arms for a hug.

His shoulders almost came up to mine and suddenly, I knew for sure just how big my boy is getting.
Ellen Seidman at 6:40 AM