That time he walked a runway of dreams 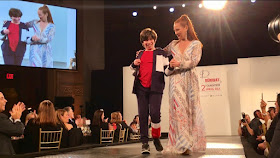 Max modeled in the Runway of Dreams Gala last Thursday. I signed him up because I wanted to support the organization, and because I thought he'd enjoy it; when I asked, he said he wanted to do it. As is often the case with Max, I couldn't have imagined how things would play out.

Dave and Max drove over from school early that afternoon. I met them at Cipriani 25 Broadway in New York and there was Max, standing in front of the building and wailing. "They didn't call him Fireman Max," Dave explained. I calmed him down, and Dave went off to find some restorative mac 'n cheese. Max ate it as the crew set up and immediately cheered up. 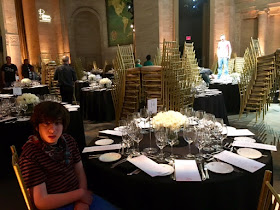 Mindy Scheier, a designer who's mom to a son with muscular dystrophy, started the Runway of Dreams Foundation. Oliver's her inspiration; when he wanted to wear jeans like every other kid, she created a pair with magnetic closures, then went on to found Runway of Dreams to promote diversity in the fashion industry and advance adaptive design. Mindy accomplished something else extraordinary: She partnered with Tommy Hilfiger to create the first designer line of clothing for children of all abilities. Max was finally able to close a shirt on his own, a thrill for both of us.

Max hesitated to line up for the rehearsal, but I coaxed him into it. There were 24 other children, teens and adults of all abilities including ones with limb differences, Down syndrome, cerebral palsy and autism, along with others in wheelchairs. 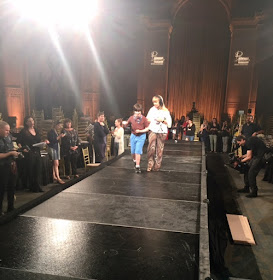 When it was Max's turn, he wanted company out there and a staffer walked with him. "Hey, Max, would you like to try it yourself?" I asked after he came back. "Yes!" said he, and off he went. I'd wondered whether he would do the butt wiggle he'd been practicing at home, but he did a foot slide. He seemed pretty pleased with himself.


We had a lot of time to kill until the runway show started at 8:45. Max and I chatted with a mom I knew from online, Shellie, who'd flown in from Illinois with her son, Jayden. Max made me message our cousin in Las Vegas to tell him all about his plans for his fantasy trip there. Guests arrived for cocktail hour. Max peeked in. Dave snagged wine. Finally, it was time to get dressed. 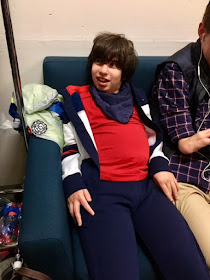 Max looked great in his outfit—a red tee, a color-blocked jacket in navy, white and red and coordinating navy joggers—but he was getting tired and in the waiting area, he plopped down next to a teen boy in an armchair (personal space: still working on that). Max perked up when he got his hair done, although he resisted the flat-iron. "It's for girls," he pointed out. 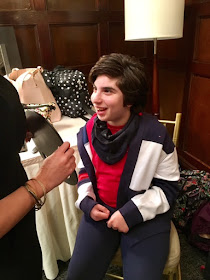 Max kept saying he wanted to leave. Some evenings he crashes at 6:30, and so it was definitely a late night for him. The extremely friendly and patient Runway of Dreams staff (shout out to Debbie!) were likely a little dubious about whether the temperamental model known as Fireman Max would lose his mojo, because they offered to have him walk the runway with someone else. I said no thanks. I had a feeling that if he could wait it out, he'd be into it. He ended up stalking Mindy and staring at her adoringly—she did look dazzling! 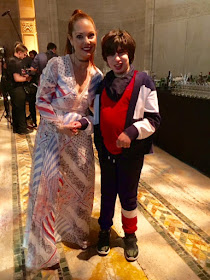 Max wanted to watch the evening unfold, and stood on the side watching. Several awards were handed out. Matthew Walzer—who famously wrote a letter to Nike in 2012 about his desire to tie his own shoelaces—presented to Nike Senior Director of Athletic Innovations and Explorations Tobie Hatfield, for developing more accessible footwear including FlyEase (Max wore a pair). A young woman named Sarah Steger won a $5000 scholarship to continue her pursuits in adaptive design and innovation. 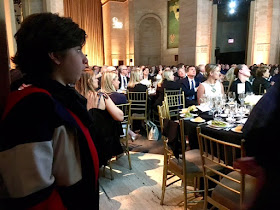 Kyle Maynard also received an award. He's the motivational speaker, author, entrepreneur and award-winning mixed martial arts athlete who's known for becoming the first quadruple amputee to reach the summit of Mount Kilimanjaro and Mount Aconcagua without the age of prosthetics. Kyle spoke about the challenges of dressing when he was growing up, including the time when he wanted to hang out with friends one afternoon and called his mom at work to ask for assistance getting dressed and she couldn't be there for him. Kyle noted the adaptive techniques he developed, including bending a paperclip to form a hook that would help him get on a sock. Max watched, mesmerized, as Kyle demonstrated how he pulls on a sock. 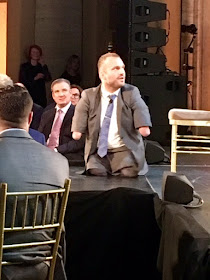 Finally, it was time to walk the runway. Darnell, the very cool Tommy Hilfiger styling coordinator, straightened Max up as Max watched the video monitor. There were several interns on hand and a cute girl named Macie from Tommy Hilfiger offered to be Max's buddy and make sure he got in line. Max liked that. 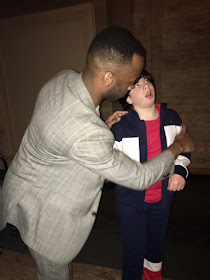 I crouched down at the end of the runway, taking in the show and loving that the walkway had become a roll-way, a walker-way, and a celebration of being comfortable in your own skin—and stylish—every which way. 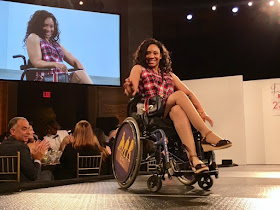 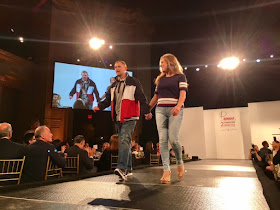 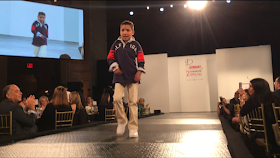 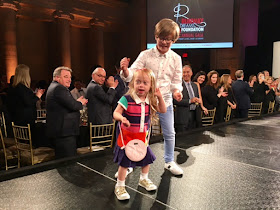 And then, it was Max's turn. Only, no Max. You know that moment in The Sound of Music where it's announced that the von Trapp family (spoiler alert!) has won the festival and the spotlight pans to where they're supposed to enter only they never show up and then a Nazi guard steps out and announces "They're gone!"? It was like that, minus the guard. Just a big old pause, with all eyes on the runway entry.

I figured Max had backed out. But suddenly, there he was...with Mindy by his side. And yes, that was a butt wiggle he did mid-walk. And yes, that is me laughing-crying in the background.

I'd told the staff we wouldn't be around for the finale, as it would be too late for Max. Only wouldn't you know it, he insisted on staying. And out he came with everyone else, smiling and dancing and celebrating a stellar night and a runway of dreams come true. 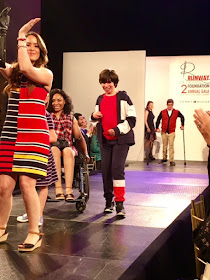