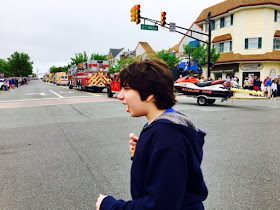 OK, technically your children's meltdowns don't take five years off your life because I would have been dead a long time ago. But they sure feel that way. I have still not totally recovered from one on Memorial Day Weekend.

Max's sensory issues have dwindled over the years, so that noise and crowds don't set him off like they used to. Still, Max is a boy who likes to have things work out just so. And life doesn't always work out just so. This means that the Memorial Day parade we attended last weekend in Stone Harbor, NJ, wasn't as big as the ones in years past. There were just a handful of fire trucks and rescue vehicles. Also, Max had gotten it into his head that he was going to ride on one of the trucks, but he hadn't told us. So there was disappointment on two levels. Max is usually an even-tempered, cheerful type but not when you get in the way of him and his fire truck dreams.

We were at the starting area right as the parade began, and we followed along on the sidewalk as Max stomped his feet and wailed. I didn't have any tissues on me (bad mom incident no. 802,549!) so I ducked into a restaurant, got some napkins and mopped his wet face.

Stomp stomp stomp. Sob. Screeeeeeeeech. Nothing I said placated him; he was in the meltdown zone. People stared. I don't really care at this point what others think, I just wanted peace and to enjoy our outing. We proceeded on the sidewalk, our own display of family dysfunction.

As we stood in the intersection where the parade turned onto Main Street,  I caught the eye of a police officer standing nearby. "Officer, the parade this year isn't that big because of the weather, but next year it should be longer again, right?" I said. And he came over, looked at Max and said, "Yes, it's smaller and yes, young man, don't worry next year it should be bigger again!"

Max wasn't buying it. He wailed some more. The officer wisely walked away to direct traffic.

A little boy nearby asked me, "What's wrong with him?"

"He's not happy," I said, stating the obvious.

I wanted Dave to take him back to the car, as I didn't want Max to think he could get away with behaving this way when he's upset. Dave thought we should calm him down by walking to the fire station. Disagreeing with your spouse as your child loses it only makes things more fun. I gave in. We started to trudge the two blocks to the fire station. The streets were filled but, like the biblical Red Sea, the crowds parted to let Max through.

When Max gets irrational in this way and wails and yells, it is completely draining. I felt bad for Sabrina, who at 12 years old is already embarrassed by everything, and Ben, just a little guy at his first Memorial Day parade. I felt bad for Dave and me, two parents just trying to show our kids a good time. And I was distraught with Max for ruining the event for us all, even as I understood where he was coming from.

At the fire station, Max continued to cry. A firefighter walked over to us; she remembered Max from a visit two years ago. She took Max and Dave into the station to use the restroom. Later, Dave told me what had happened. She had reiterated to Max that this year the parade was smaller because of the weather, but next year it would bigger.

She also told me and Dave that we could call ahead of time next year and see if maybe Max could ride in a truck. We'll be making that call.

By the time we walked away, Max had calmed down. I didn't. We got in the car and headed home. When I spoke with him about his behavior, he grunted and said "No!"

This weekend was relatively calm. Still, a week later I am still thinking about what happened and wondering what we could have done differently. We talk events through with Max ahead of time, but unexpected situations happen. Maybe we should have taken him back to the car. Maybe there is some technique we have yet to figure out. Maybe this behavior, too, will recede over time as Max matures.