He's got places to go and people and couches to climb 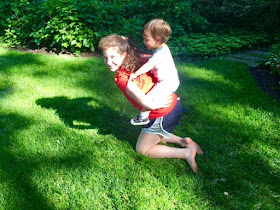 At 19 months old, Ben has discovered the joys of climbing—on the couch, up the steps, all over Sabrina. Sometimes, Max falls asleep before Ben does and when I walk into Max's bedroom to tuck him in Ben will clamber onto his bed and poke at his face. Max thinks this is really funny. Ben squawks when I scoop him up and carry him out.

It's been a good ten years since I've had a kid climbing over stuff, and I don't much remember Sabrina being that rambunctious although I do recall that she liked to open the refrigerator and perch on the bottom ledge (Ben can't do that because we have a bottom freezer now). She also loved to tear up newspapers (Ben got the same gene). Dave and I are a little bit nervous (WATCH HIM!) and a lot amazed at this bundle of energy. Also: We are tired.

At Ben's age, Max was just getting into commando crawling, pulling himself along on his arms like a soldier. Watching him move around was as awe-inspiring as Ben's feats of climbing.

Sabrina's taken to calling Ben Monkey Boy. My favorite move of all is when Ben climbs into the space beneath his high chair and hangs. The other day, he sat there for a few minutes and played with a ring stacker, just a small moment that felt large. Mostly I'm chasing Ben around, holding his hand as he attempts to rock-climb up an armchair, or trying to hold him down on the changing room table as he does a back handspring. It's rare to catch sight of him staying put, let alone pondering and developing an inner life.

Two minutes later, he was climbing onto the couch again, flopping down and giggling as I held out an arm to keep him safe and laughed along with him. 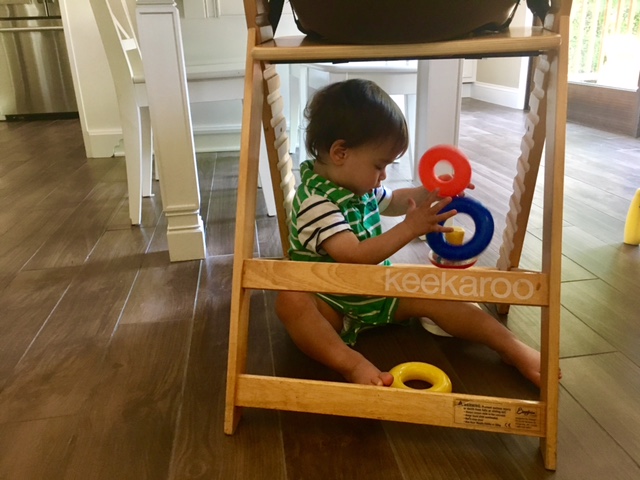