When your baby's development breaks your heart just a little 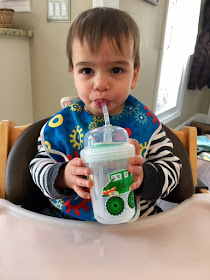 I handed Ben a straw cup with water the other day. He's been doing fine with a sippy cup but I had one with a little whirly thing that spins when slurped and I thought he'd find it fun. Ben grabbed the cup, put his lips around the straw and chewed on it a bit. Then he started drinking out of it, and flashed me a big grin.

I smiled back, happily, but then a pang of sadness struck. Max can't yet drink out of a straw. I can still recall being shocked that he wasn't able to do it—it seemed like such a basic, simple action...unless you have significant oral-motor issues. Before Max, I never once considered the coordination required to sip out a straw, drink from a cup, chew food, articulate consonants or just chew candy or gum.

There have been a couple of times when one of Max's speech therapists, with much coaxing and effort, has been able to get him to take a sip or two through a straw. Otherwise, no. While that would come in handy for enabling Max to drink sans spillage, in the scheme of priorities it's not up there. We spend his home speech sessions focused on articulation.

Ben's development hadn't previously brought up residual sadness about Max's delays. But when he did something that Max couldn't yet do, it got to me. Suddenly, it seemed so unfair that Max has had to expend so much effort—years' worth— to attempt to achieve something other children can pick up in mere minutes. Ben's lips were perfectly closed around the straw; nobody had to show him how. He automatically drew air in and coordinated swallowing; nobody had to demonstrate how.

I don't recall feeling this way when Sabrina was little; I think Dave and I were just overwhelmingly grateful that she was developing on time and on her own, sans therapy. These moments of sadness also likely have to do with the fact that there's a major age gap between Max and a baby brother who can drink from a straw and is getting ready to use a spoon.

Yesterday, it happened again. Dave made steak for dinner and he sat next to Max, cutting some into small bits and feeding it to him so that it reached his back molars—the texture is particularly hard for Max to manage. Dave had previously been giving Ben yogurt. Ignored, Ben picked up the spoon and started feeding himself, just like that. Mostly he got the yogurt on his cheeks and nose, but there he was, figuring out something that took Max a long time to learn how to do. I noticed.

Once again, I was savoring Ben's glee and feeling latent grief, too. That passed quickly. Ben looked so pleased with himself. Max contentedly chewed steak. Sabrina remarked "Yum!" as she dug into grilled fish, an actual non-carb. My children were happy. I had no reason not to be. 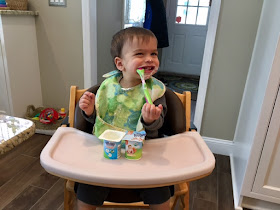