The kind of developmental progress that can drive ya nuts 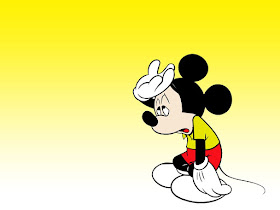 This weekend, Max and I were discussing a school lunch. He told me he wanted to skip it. I said, "Max, you have lunch at noon and your plane leaves at 6:00 p.m."

We were discussing the lunch he was going to have on the Thursday that he, Dave and Dave's dad leave for Disney World.

The trip is happening at the end of March. Ever since we booked it a few weeks ago, Max has literally been planning every detail of it.

For years, Max has had a habit of repeating phrases and questions. Most recently, it was "Is Daddy coming home now?" I finally recorded a video of him asking the question then answering himself, which kinda sorta helped except he still tends to ask a million times a day, which was an improvement over a billion times a day.

These days, he's not asking that as much because he is busy plotting out his Disney World trip. On the upside, this shows progress in higher cognition and the ability to problem solve, organize and think. It happens in the frontal cortex of the brain, which sustained damage when Max had a stroke at birth.

On the flip side, our conversations are all Disney, all the time. As you might imagine, this is not so charming.

Max will eat mac 'n cheese before they take an Uber to the airport.

He and Dave will go to the Orlando ice-cream place they looked up soon after the plane lands.

He will be watching numerous shows at Disney World, including the fireworks.

He will be eating Mickey Mouse mac 'n cheese.

Oh, but there's more. He wants to make sure people in his life are fully informed.

Last week, he programmed his speech app to tell his teacher that on the week he is away, instead of doing his current events on Friday he will be doing it on Wednesday. (Yes, admirable responsibility!)

This week, at Max's behest, I told his bus driver that Max would not be on the bus that Friday and the following Monday in March. I've also let our babysitters know as he stood by, making sure I relayed the correct information.

When I ran an errand over the weekend, Max told me he wanted me to get a card for him that says, "I will miss you, have a fun time" that I can give to him before he leaves.

He tells everyone who comes to the house—his therapists, Sabrina's friends, the house alarm repair guy—that he is going to Disney World. 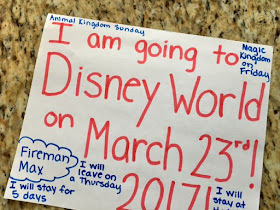 When he was at a program, he asked to have this game plan drawn.

Yesterday afternoon, Max decided that he needs a travel-size bottle of hair gel for the trip and he and Dave had to go to CVS to get some.

Our only relief comes from gentle teasing. Dave likes to say, "Hey, Max, want to stop at Peanut Butter World?"

"Noooooo!" Max will respond, laughing. (He knows full well he is allergic to nuts).

I like to tell him that I'm crashing their all-boys trip.

Me: "Max! I am soooooooo excited to go to Disney World!"

Max: "You're not going. I'm going." (Another #upside: his articulation of the "g" in "going" is getting clearer and clearer.)

Me: "Are you sure? I could hide in your suitcase!"

And then, he'll ask if we can go pack for his trip.

It's going to be a long two months.