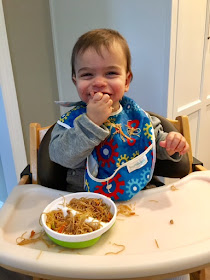 We ordered in Chinese food for dinner the other night, remarkable only in that it was such a normal thing to do and normal felt so good. As has become the norm these last two weeks, I'd been on and off news sites, Facebook and Twitter for the previous few hours, seeing what friends were saying about the new administration, reading stories they'd shared, checking updates on the immigration ban and learning about ways to respond. I can't look away.

I try to stay off social during dinner, but don't always succeed. That night, though, we'd decided to introduce Ben to Mei Fun. I poured some into a bowl, sliced it up, put it onto his highchair tray, put my phone in another room and waited for the fun to begin.

As if weren't hard enough to resist the siren call of my phone before the inauguration, it's become virtually impossible now. I am there not just to take in and share news but to console friends who are posting about being depressed and anxious. Sweet photos of a newborn baby, cute videos of pets, discussions about which TV series to watch: They're all still there. But I'd say that about 70 percent of the posts in my Facebook feed these days have to do with politics.

Even if our children are not old enough to watch the news, or it is beyond their level of comprehension, they sense our anxiety and concern. I have emitted a number of "WHAT?!" reactions when yet another astounding headline has cropped up. My children are getting used to seeing me staring down in consternation at my phone.

Sometimes, this leads to conversations with them. Recently, I stood at a kitchen counter with tears in my eyes after I came upon a photo of a Syrian refugee father cuddling his son. Max wanted to know why I was crying. I said I was sad because there's a new rule that people from some other countries aren't allowed to come to the United States, and I showed him the photo. He didn't totally get what I meant, but if we keep talking about it he might.

I'm glad to have these discussions. Our children should know, in a developmentally appropriate way, what's happening in the world. Yet they also deserve to keep living their previously scheduled lives.

Experts regularly implore parents to stop texting and scrolling through social media and be fully present for our kids. That seems more important now, than ever. No matter what's erupting in social media, we owe it to our children to be fully immersed in playing with them, talking with them, doing their homework and school projects with them and all those other parts of parenthood that involve focus and connection.

And so, we sat at dinner and watched Ben discovering Mei Fun. He picked up a few noodles from his bowl, placed them on the tray and poked at them. Then he grabbed a handful and shoved them into his mouth. Half fell out, and we all laughed. Ben shoveled in another batch with a big smile, which only made more noodles tumble out.

OK, so at some point I had to grab my phone to snap a photo, but that was it for electronics at the dinner table. That night, we were drawn into the simple joy of watching our little guy discover food. We were celebrating life and relishing wonder, exactly what children need to thrive. Us, too.
Ellen Seidman at 6:38 AM