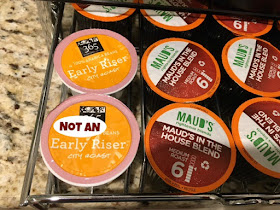 Dave's on a business trip this week, so I'm doing the early shift. Ben tends to wake up around 5:00 a.m. In a word, ugh. I am grateful he is sleeping through the night. But getting up at that hour makes me queasy. Going to sleep earlier isn't easy—I'm a diehard night owl and can't nod off before 11:00 p.m. or midnight on some nights. Dave's the opposite; he crashes at around 9:30.

"You've gotta give me credit for doing the morning shift all these months," Dave said when he called from England. "Honey, you get ALL the credit," I told him, and I meant it.

I've tried to sleep train Ben. By that I mean, for the last couple of mornings I've let him stand in his crib for a half hour talking to himself as I lay in bed and prayed he'd go back to sleep. Nope.

I am such a non-morning person that I used to schedule entire college semesters around classes that started after 10, ideally 11. Back in school, I could also avoid making conversation with people in the early morning. There is no avoiding talking with your fifteen month old, although it helps that he's still in the gibberish stage.

Iced coffee comes in handy. I've been making it at home for the last year since I discovered Grady's Cold Brew gigantic coffee pods. You steep them in water in a pitcher overnight and voila, super-tasty iced coffee. Bonus: Ben giggles when I swirl it around and the ice cubes shake. It would likely work even better if I bathed in the stuff, but that could get expensive. Plus, I'd have nowhere to put Ben at 5:00 a.m. as I lounged in a tub of iced coffee.

On the upside, I've been putting my two hours of found morning time (pre-Ben, I got up at 7) to good use, just like time efficiency experts say you should. I've embarked on a new fitness regiment. It consists of doing laps around our first floor, following Ben as he toddles. I can only imagine the number of calories I am burning and how slim I will soon be!

Ben actually has quite the impressive workout routine. As you can see in this video, it includes weight lifting (OK, so they're his shoes), navigating an obstacle course and chanting that inspirational mantra of fitness fiends everywhere, "Dikka dikka dikka do." Given the number of laps he can pull off on any given morning, it's clear that he is aiming to be the most fit baby in America.

Other industrious things I'm doing in the morning: For one, I'm familiarizing myself with Disney World videos on YouTube. Max wakes up when Ben wakes up, and likes to spend his found morning time indulging his obsession (he, Dave and Dave's dad are headed to Disney in March). I also de-Cheerio the house, which involves Dustbusting the trail of little O's Ben leaves; read through emails; put away dishes; compile the grocery shopping list; pick up the stacking cups Ben has tossed off his highchair (yet more calorie burn!); make oatmeal with mashed banana for Max and Ben; and stare out our deck doors at the breaking dawn and think wistfully about all the people who are asleep, which is as close to meditation as I'll ever get.

Becoming a morning person is going to change my life!

At least until Saturday, because Dave will be back home by then.