When your child with special needs starts to advocate for himself 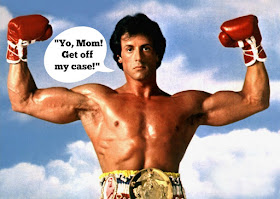 "You're not being nice to me," Max says. I am sitting on the couch, typing on my computer. I've told him that I need quiet time to finish doing work, and that he should go into another room.

I've said it in a firm tone of voice, with a bit of an irritated edge because I have said it to him several times over the course of the last 10 minutes and I need to turn in something before the end of the day.

"Max, it's not that I am not being nice. I just need to finish this up and I can't do that if you keep coming in and talking about Disney World," I say. Max has been making plans for a spring trip to Disney. For better and for worse, he doesn't yet know how to pick up the phone and book airplane tickets. This means that every day, he asks when we're going to get the tickets.

"I know!" he informs me. He says that a lot lately, too. Because: teenage know-it-all 'tude. And because Max is growing more confident.

For sure, Max needs to understand that a parent telling you what to do isn't crossing the line into mean territory. Nor does a parent asking you to finish your dinner, go to sleep or to pick your socks up off the floor qualify as being mean—times when he's also informed me, "You're not being nice to me!"

But I'll take it.

For some time now, I've had self-advocacy on the brain, mostly starting when I read an AbilityPath report about life after high school. As a special needs parent, you spend a good part of your life nudging and pushing and bull-dozing and generally advocating for the sake of your child, all the while defending and protecting him from people who just don't understand those with special needs. The ideal, of course, is for your child to be able to stand up for himself and to advocate for the care and services he needs.

One simple way to start doing that is giving your child simple choices: what to wear, what to eat, where to go, which activities to do. I was so excited when Max asked to sit in on his IEP a couple of years ago, and he has ever since.

Sabrina has helped Max better stand up for himself, too. Especially when she acts obnoxiously or bosses him around. "You're mean!" Max started telling her this year.

Last night, I walked in the door and encountered a pouty Max, who wanted to go see the movie Sing. He's been asking to see it ever since he first saw a preview several months ago.

"OK, let's look it up," I told him. And I walked over to my computer and Googled. And wouldn't you know it, he was right.

And he kept reminding me of that until he went to sleep.


Image of Rocky courtesy Universal Pictures
Ellen Seidman at 6:37 AM