One good way to see how far your child has come

There are several ways to really notice—and appreciate—the progress your child with special needs has made. One is when you visit a place you haven't been to in some time, like a play area or a museum, and see the difference in the way your child behaves and what he can do.

Same goes for attending an annual event, like your child's holiday show at school. Max's extravaganza is tomorrow. I can still picture him standing outside the room where it was held, sobbing, because he was afraid to even come in. Last year, he commandeered the mic from the principal.

Then there are those times when friends, relatives or the neighborhood dry cleaner who haven't seen your child in a while share observations about how he's changed. His speech is getting clearer. He's walking really well. He seems more engaged. These morsels, you devour like the sweetest candy you've ever tasted.

Also! If you happen to have a child who has a habit of repeating birthday parties—the b-day equivalent of that movie Groundhog Day—then you will notice just how far he has come. I have that child.

For the last several years, we've had Max's party either near our local fire station (so he and all the kids could visit after pizza and cake) and at a bowling lanes he enjoys. Earlier in the year, though, he started asking about bringing back Merriloons the Clown. Max met her at a pumpkin picking event in 2009. She came to his birthday party that year, and several afterward.

Throughout the party, I kept noticing how much Max had changed in those seven years.

Progress observation #1: It was great to be out of that purple phase. Back then, everything in Max's life had to be purple. Notice his shirt, the tablecloth, the flowers, the plastic forks and knives. Max used to refer to himself as Purple Max, until other obsessions followed and he became Purple Car Wash Spaghetti Max. 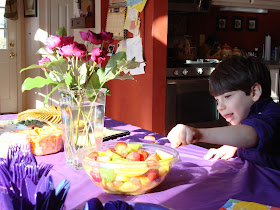 Progress observation #2: Max has gotten considerate. For years, life centered around him and his needs. He didn't much think about other people's needs. But there he was, before the party started, in the dining room moving chairs around at the table so there was room for all the kids and enough space for one friend in a wheelchair.

Progress observation #3: Dave and I no longer had to be by Max's side at every minute. He walked around on his own, chatting with friends and hanging with Merriloons. He went to the bathroom by himself. At one point, I came upon him sitting in the dining room alone, polishing off birthday cake. Years ago, we always had to feed him. 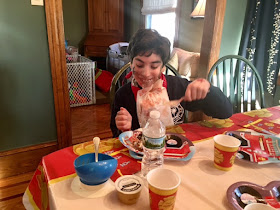 Progress observation #4: Max had fun mingling. For a couple of years, he was obsessed with C, a boy in his class, to the point where we had to write signs that said "Max and C" and print out photos of the child and hang them everywhere in the kitchen. When C and his dad came over for one of Max's parties, I watched and winced as the dad took a look at all the pics of his son. "Max just loves him!" I said, brightly. Meanwhile, Max attached himself to this kid at the party and followed him everywhere. We must have seemed like stalkers.

Progress observation #5: Max didn't melt down when things weren't exactly how he wanted. Instead of getting his cake from Cold Stone Creamery with a photo of his favorite fire truck, I got the same from Carvel, mainly because it's more convenient. When he saw the Carvel box, he momentarily pouted that it wasn't Cold Stone Creamery—but then he moved on. 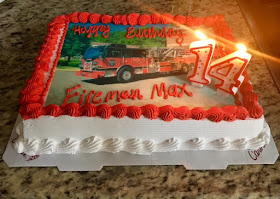 Progress observation #6: We are lucky to have a growing number of people in our life who appreciate Max for who he is, like his firefighter friends at the local station. A couple of the guys showed up at our house that day in his favorite truck. 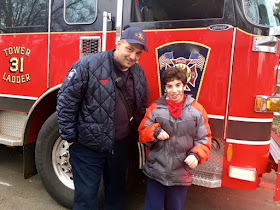 Progress observation #7: Sometimes, there is no progress, and that's OK. As I've said, there is no such thing as age-appropriate for your child with special needs. Seven years later, Max still loves having a clown do face-painting and magic tricks at his party. And if it makes him happy, well, that makes me happy. 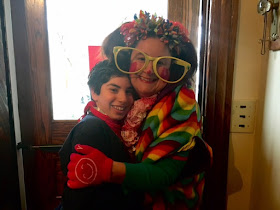