When that hurt doesn't hurt anymore 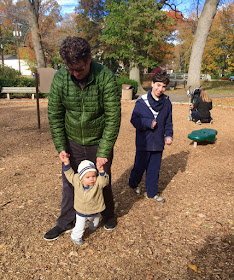 Ben's on the verge of walking. It happened really fast—one week, he was pulling himself up on furniture and not long after, he was surfing it. This week he started toddling around when we held his hands. Soon enough, he's going to ask to borrow the car so he can go to Toys 'R Us.

We are all enchanted with this development (as if we weren't already besotted with him). This weekend, when I broke out the walker, we giggled nonstop as Ben zoomed around. 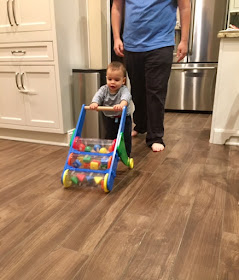 I don't have a distinct memory of Sabrina's first steps, although I remember her cruising on furniture and pushing a pink car around. Max's first steps, I will never forget. He was three years old, it was his birthday, and Dave and I were with him in his bedroom. He toddled from Dave's arms into mine, the walking we were never sure we'd see. Dave and I both laughed through our tears.

Yesterday, he wanted to know if he walked when he was a baby.

"You were three years old when you started walking by yourself," I told him. "Before that, you used a a walker to help you."

"Ohhhhh," he replied, considering that.

"At first you had a hard time walking, but then you did it!" I said, feeling as bright as I sounded.

Up until pretty recently, it used to literally make my heart ache to talk about Max's early years. My chest would tighten and feel heavy, and sadness would wash over me. I was still feeling the full strength of the grief, still reliving the anxiety I'd felt about his future.

The grief will never completely go away. There are times when it blindsides me, like if I'm in my car when school lets out and I drive by a crowd of boys Max's age walking home.

But time, it does heal. Max has healed me, too, with his progress, charm, sunny disposition and the way he says "Ohmmy!" When I talk about him as a baby, it no longer viscerally hurts. I am very grateful for that.

"Daddy and I were so happy that you walked, we cried!" I said.

"Honey, he doesn't get crying from happiness," Dave said from the other room.

"You know, we laughed too because we were so happy for you," I told Max. 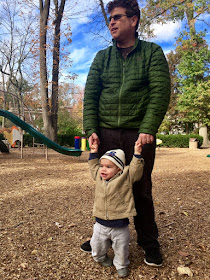