On taking your children with you to vote 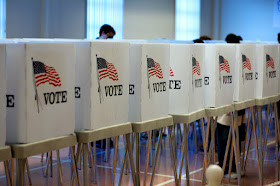 I've been looking forward to taking the kids with me to vote. I kept envisioning it: We'd take selfies inside the booth, I'd help Max pull levers, I'd talk about what a historical moment it was. #boothgoals

But, no. Yesterday, as Max and I drove home from checking out another high school, I said, "Max, are you excited to vote tomorrow?"

His response: "No thank you!"

He's been saying that a lot lately, including when I tell him things like, "It's time to go to sleep" and "Please pick the napkin up off the floor." At least he is politely defiant.

I was bummed. As usual, after seeing another potential high school for Max I had a lot on my mind about his future. And now, I was concerned about his present. As in, why didn't he care about going to vote?

One thing I'm guilty of as Max's mom: attributing his behavior to his disability. I wondered why he didn't care. I wondered what it said about his cognition, and his ability to grasp concepts like what it means to vote. I worried.

Max has taken one interest in the election: Saturday Night Live. Particularly, Alec Baldwin as Donald Trump. Max could not stop laughing.


After that, whenever Max saw a photo of Donald Trump he'd start laughing and I'd have to explain that was actually Donald Trump, the presidential candidate, and not Alec Baldwin, the actor who pretended to be him.

"It's boring," he said, and I cracked up. I flashed back to standing with my mom in a very long line to vote, at a nursing home. Then, excitingly, someone handed me a lollipop. (Some things, you never forget.)

Max was exactly the reality check I needed. Politics is not everyone's thing, especially when you're still developing an understanding of it. I do think he would like being in the voting booth, but I'm sure not going to make him stand on line. I'll take some photos and show him.

Meanwhile, I hope the lines are the craziest longest lines an election in America has ever seen. Get out and vote, peoples.

Image: Flickr/StickWare
Ellen Seidman at 6:40 AM