You don't have to give my child free donuts 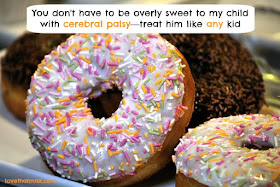 Dave and Max walked in the other day from a Dunkin' Donuts run.

"The woman gave us free donuts," Dave said, handing me the bag with a sheepish smile.

"What happened?" I asked.

Dave explained that the staffer at the counter had watched as Max informed Dave he wanted chocolate milk. "He doesn't talk," she said, although Max was talking, in his own way.

Dave noted that Max talks. Then she asked Max which donut he'd like and he pointed to the jelly kind. She gave him two, charging Dave only for coffee and a chocolate milk.

She was just being kind, of course. Except she likely gave Max free donuts because he has a disability, and she felt badly for him. And that is what concerns me.

Now, there are far worse things for me to take issue with than people offering my boy sugary goodness. But what gets to me, as it always does, is the pity. The thinking that having cerebral palsy is such a misfortune and that his life must be sad and terrible, so he deserves free donuts.

I'm thinking about this on World Cerebral Palsy Day, which is dedicated to celebrating the lives of the 17 million worldwide with cerebral palsy and those who support them; creating a voice for people with CP; and making changes that improve their lives.

I want all of that for Max. I also very much want people to treat him normally. It's doubtful that woman at the counter regularly hands out donuts to teens who walk into the store. Max may have physical and cognitive differences because of his form of cerebral palsy, but at heart, he is a teen and he deserves to be treated like any teen.

Sometimes, strangers offer up prayers instead of donuts. A couple of years ago, I spoke on a BlogHer panel with Katinka Neuhof, who writes at The Fabulous Adventures of a Four Legged Woman. She told of rolling down a street in New York City in her wheelchair, with her son by her side, when a woman approached and announced that she would pray for her.

As the mom of a child with cerebral palsy, I don't see tragedy—I see a boy who is every bit as wondrous and complete as my other children. And, on occasion, irksome. (See: "teen.")

Besides gratuitous prayers and jelly donuts, the other challenge Max faces with people who don't know him is that they sometimes don't know what to say or how to behave. When he was younger, they'd ask "Can he understand me?" as he stood right there. Now they may smile at him kindly, stare or not approach him at all. Things can get awkward.

Writer/activist Cara Liebowitz of That Crazy Crippled Chick tells of the time she went to the library with her mother to renew her card. She was feeling tired and lazy, so they decided her mom would walk across the street and do the renewal, only Cara needed to sign something. "So I got out and schlepped across the street and it was really fine," she recalls. "But when the librarian saw me with my crutches, she obviously felt bad for making me come in. And she goes to my mom, 'I didn't know she was....' And she trailed off and tried again. "You should've told me she was...." She was obviously trying so hard not to be offensive. My mom and I reassured her that it was okay, I signed the form and we hightailed it out of there, barely making it past the door before we burst into hysterical laughter."

The awkwardness and misplaced kindness stems from people's discomfort with anyone different, and wrong assumptions. A lot of us, myself included, weren't raised knowing anyone who had a disability. We may not have been taught by our parents about what is more alike than different.

Cara notes that she sees people's perceptions of her change based on how visibly disabled she looks. In college, when she used a walker or crutches instead of a wheelchair, she says, "people would be so happy that I was walking and comment on it like, 'So good to see you up and about!' as if I was recovering from a bad flu or something. The thing is, walking is actually harder for me. I don't like to walk and I can do a lot more things when I have my chair. But people are so set on the idea that walking is better."

People are also so set on the idea that talking is better, even if Max has a speech app that enables him to communicate more easily than he can by speaking.

People don't get it. So they get flustered. Or they instinctively choose kindness and pity, instead of parity. I'd venture to say this is true not just of kids and adults with cerebral palsy but ones with Down syndrome, autism and other disabilities as well.

My child with CP does not need sympathy. He needs ordinary respect and people who don't avert their eyes or act overly sweet. Max's sister is one of the few people in his life who cuts him no slack. "Max, you're a gen-ius!" Sabrina said the other day when Max pointed out that it was raining. She was being sarcastic, and I so appreciated it. Why shouldn't people be sarcastic with him? Why shouldn't they joke around with him and even tease him, as kids tend to do?

To be sure, youth with disabilities do get special accommodations—say, at amusement parks. Why is that OK? Well, it levels the playing field, enabling a person who is scared of crowds or who gets fatigued waiting in line because his muscles tire easily to enjoy the amusement park, too.

Giving free donuts to a boy because you feel sorry for him is a whole other thing. It's a pity present. It doesn't equalize; it demeans. And yes, I am sensitive to this sort of behavior because we have often encountered it over the years—have free ice-cream, have a free toy, have a free ride, have a free whatever because you have cerebral palsy. I mean, if Max had been wailing and the DD staffer simply wanted to make his day better, sure, bring on the free donuts. Most of us have gotten freebies over the years from store people, in the name of goodwill. But Max was just standing there, being his usual self.

Kind gestures that emanate from outdated viewpoints about people with special needs aren't the sort of deeds I want for my son, as well-meaning as they may be. They keep him rooted in old-school perceptions that people with disability are unfortunate. And that is not a message I ever want Max to pick up. I also don't want him to grow up thinking he can get free stuff because he has cerebral palsy. Dave and I are glad to use these occasions, when possible, as teaching moments, thanking the individual even as we point out that Max is a capable person, in his own way.

The manifesto of World CP Day envisions equality that I dream of for Max. As it says, "We have the same needs: To be loved. To connect. To be part of something. We share the the same hopes and dreams. The same interests and passions. We all have a similar hunger to explore thoughts and debate ideas. To contribute. We all have the same commitment to living a life of purpose and meaning. These are not just things we have in common with each other. We share them with all of humankind. Because we are not different at all. We are the same."

As for those jelly donuts, Max wasn't aware of what happened. I hope perceptions of people with cerebral palsy continue to evolve over the years and when Max is older, there are far fewer people offering him I-feel-bad-for-you donuts. But heck, if they keep right on handing them out, I hope Max looks them in the eye and informs them, "You don't have to do that for me, I can pay for them—but thanks!" And then he walks out of the store with his stash in hand, without a doubt of who he is.

Also check out: What cerebral palsy is and isn't